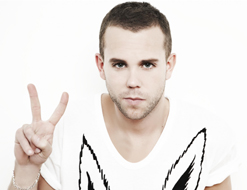 Hey friends, Andy Gesner and the staff of HIP Video Promo bringing you the next must-see video from our friends at Mute Records! When Anthony Gonzalez of M83 announced an open call for clips for “We Own The Sky” — a contest for prospective video directors — he expected an enthusiastic response. Saturdays = Youth had been hailed worldwide as a new synthpop classic; some of the thousands of fans who’d had such an ecstatic reaction to the album must have videocameras and good ideas, right? Indeed. As optimistic and confident as Gonzalez is, neither he nor anybody affiliated with M83 were prepared for the landslide of contest entries. The “We Own The Sky” video contest proved to be such a viral phenomenon — and the quality of the submissions was so staggeringly high — that M83 was forced to push back the deadline date. Mythology, street-scenes, athletics and choreography, digital video-effects: M83 listeners incorporated all of these elements and more into their inspired clips for the song. It’s a testament to the cinematic quality of Saturdays = Youth that the album inspired so many distinct hallucinations — so many different and wholly valid visual interpretations of its gauzy, radiant, atmospheric sound.

The winning video was chosen by Gonzalez himself, and so perfectly does it capture the romantic and mysterious summertime quality of M83’s recordings, it’s hard to see how any other clip could have topped this one. After watching Young Replicant’s version of “We Own The Sky”, the other entries — as expressive as they are — fade to distant memories. The video on this reel is lyrical, beautiful, iconic; a daylight reverie condensed into three-plus minutes of otherworldly footage. The mastery demonstrated here makes it all the more remarkable that the video directors on the Young Replicant team are still in their teens.

Then again, since much of Anthony Gonzalez’s writing is about the magical quality of youth, it’s probably no surprise that his teenaged fans would be best equipped to realize his vision. Young-thinking romantics of all ages have embraced his experimental sound: the M83 audience has expanded monumentally since the release of Saturdays = Youth. National Public Radio nominated the set for Album Of The Year; Pitchfork put the disc in their 2008 Top Ten. This summer promises an even greater expansion of M83’s audience: they’ll be taking to the road with Depeche Mode for an upcoming arena tour. Concertgoers can expect synthpop heaven.

Heaven — or maybe just a kind of transcendence — is exactly what the Young Replicant clip delivers. “We Own The Sky” follows a group of beautiful young urbanites on an idyllic trip to the countryside. They bask in the sun together; they climb hills; they unfurl kites and send them soaring into the blue. Two of the kite-flyers are visibly smitten with each other — they shoot embarrassed glances, smile shyly, circle each other under the canopy of kites. But just as they’re about to get together, a dark shadow stains the ground. Gigantic white geometric shapes — alien and impossible – cruise through the air above, converting the spring day into a surreal tapestry. Most of the kite-flyers run, but the two lovers are brave enough to step into the shadow. They’re rewarded with a cosmic shower of confetti, and the world becomes a parade, or a night-club, or an inverted sow globe, or a parallel dimension of passion, mystery, and wonder.

Mute Records always delivers the goods, and this time is no different! If you need more info, call Andy Gesner at 732-613-1779 or e-mail us at info@HIPVideoPromo.com. You can also visit www.Mute.com or www.ILoveM83.com to find out more about M83.