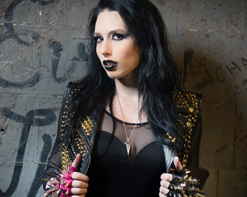 Manhattan-born singer-songwriter, Madame Mayhem, is a true rocker with an eclectic style in every aspect of life. With her ‘in your face’ attitude, Mayhem is definitely the right word to describe this extreme artist. For her brand new video, “Monster”, she’s primed to take her fiendishly fantastic music to a mass audience that might not know what hit them until it’s too late…

She began to take the music scene by storm when she was featured on iHeartRadio New Discovered and Uncovered Artist chart, and has since performed on nation-wide tours with Doro and Mushroomhead, headlined VH1’s “THAT METAL SHOW” annual Christmas party, and performed at packed rooms on both coasts.

Her new album, Now You Know, recently made available in North America, and will enjoy a European release this summer, features a powerhouse team of rock talent including Billy Sheehan (Mr. Big, Winery Dogs), who produced and played on the album, Ray Luzier (KoRn, KXM), Ron “Bumblefoot” Thal (ex Guns N’ Roses), Russ Parrish (“Satchel” from Steel Panther), and Corey Lowery (Saint Asonia). With hard rock roots and melodies that show off her vocal range, “Monster”, the first single off the album, is the perfect introduction to this deviant songstress.

“Monster” is most certainly a beast of a clip! Madame Mayhem is the only person on camera, but her image is more than enough to fill three and a half minutes of screen time. Whether she’s wildly restrained in a straitjacket, prowling the darkened warehouse in her fiercest, eye appealing outfit, or even shredding the guitar, she owns every second of it. These crumbling walls cannot contain her energy forever and it’s only a matter of time until this monster is unleashed from her cage.

Here at HIP, we’re huge fans of artists that push the creative envelope, and Madame Mayhem is the pinnacle of that kind of attitude. We would love to get you a copy of her new album, Now You Know, so get in touch with Andy Gesner and the HIP Video Promo staff at (732)-613-1779 or email at info@HIPVideoPromo.com. You can also visit www.MadameMayhem.com or www.Facebook.com/MadameMayhem for more info on Madame Mayhem.