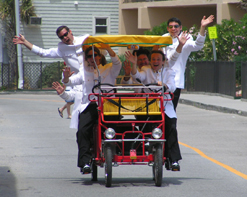 Greetings to my music video programming friends! It’s Andy Gesner and the staff at HIP Video Promo, back with another hilarious indie clip from an underground band more than worthy of widespread recognition. The members of The Majestic Twelve are proud to live in a beach town (they’re from Wilmington, North Carolina), and now that the weather’s heating up, it’s their time of year. Kenyata Sullivan, the band’s frontman, has made his name synonymous with Memorial Day in Carolina rock circles, organizing the renowned and uncompromisingly-indie Wilmington Exchange festival (who’s past participants have included The Dismemberment Plan, Lamb Of God, xbxrx, Mae, and many other luminaries before they were signed). Sullivan and his WE Fest compadres tend to choose bands that share values with The Majestic Twelve: a belief in experimentation and outspokenness, a certain disregard for pop trends, and, perhaps most importantly, an irreducible playfulness.

Yes, he and his bandmates are DIY pranksters to the core, as this video (which was made as a gift to the band by crew members from the NBC show “Surface”) shows. It opens with mistranslated and subtitled shots of a couple getting shooed off of the beach by nuclear waste inspectors, and finishes with the inspectors kissing – or trying to kiss – through radiation-proof suits. In between, director Brian Rainey intersperses cartoon imagery, live-action hijinx reminiscent of slapstick British comedy, and live footage of the Majestic Twelve manipulated so it appears to have been taken from the Ed Sullivan Show.

The group would have fit right in on Ed Sullivan, too. Searching For The Elvis Knob is eleven cuts of propulsive, rough-and-tumble garage pop, gleefully executed and enthusiastically played. The Majestic Twelve love big, crunchy riffs and singalong melodies, and unerringly capture the roughneck spirit of Sixties rock and roll. Sullivan’s lyrics, too, bristle with barbed humor and amusing defiance: “Livin’ On The Beach” flips off tourists and those who fear hurricanes instead of surfing in them, and encourages the ocean to undress attractive sunbathers. Here – as he does elsewhere on Searching For The Elvis Knob – he dismisses the weather service, and he seems to view an amusing and casual disregard of Mother Nature’s tantrums as a Cape Fear badge of authenticity. “No lecture ever changed a local”, he sings, “and nobody wants to hear your speech/ you ride the storm out here with us/ or you ain’t livin’ on the beach.”

And behind the sight gags, the beach shown to us by Sullivan and Rainey is a site of some considerable peril. The first occupants we see have Geiger counters in their hands, and they’re busy checking out two gigantic tubs of hazardous waste. The couple who are trying to sunbathe immediately decide to hold a concert to save the beach, and put posters to that effect around town. The Majestic Twelve will save the beach with their magical powers of rock! Once the members of the band are caught up in the scheme, they’re shown fighting off genuine (albeit cartoonish) peril: pirates, fires, wild beasts. Luckily, a martini girl is present, and she’s ready with a cocktail whenever a bandmember is able to extract himself from a scrape. Part Gilligan’s Island episode, part Saturday-morning cartoon pastiche, and part satire of beach-closing hysteria, the clip for “Livin’ On The Beach” boasts that same dismissal of convention and authority that makes The Majestic Twelve’s music so exhilarating.

We are thrilled to be working once again with our friend Kenyata Sullivan and the Pandora’s Legacy promotional team to bring this new clip, perfectly timed to coincide with the beginning of summer! We have plenty of copies of Searching For The Elvis Knob if you would like to set up a Majestic Twelve contest or on-air giveaway. If you need more info, call Andy Gesner at 732-613-1779 or e-mail us at info@HIPVideoPromo.com. You can also www.TheMajesticTwelve.com to find out more about The Majestic Twelve.

For info about The Majestic Twelve’s previous video, “I Don’t Have A Job” click HERE