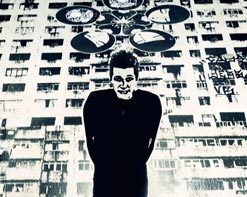 Declan O’Shea and Christian Montagne are the brains behind the Irish/French indie hard rock outfit MAKO. Before launching Mako the two were members of the beloved and acclaimed band Cyclefly. In Cyclefly they toured Ireland, the UK, the USA and Europe extensively supporting groups like Bush, Live, Linkin Park (they even recorded a track with Chester Bennington). They also made appearances at all the major festivals including Reading, Leeds, Ozzfest, Woodstock 99 and more. After the end of Cyclefly, they regrouped and formed MAKO. The new group quickly grabbed the attention of fans and critics alike, even earning recognition from The National Academy of Recording Arts & Sciences who placed Mako on the Official Ballot for the 2011 Grammy Awards in four separate categories.
​
MAKO retains the edgy alt-rock sound that gathered so many fans for Cyclefly, yet it has a mellow maturity reflecting pair’s growth as songwriters and as musicians. The kind of development and maturity that only comes from experience, raw talent and hard work. All of these traits are on full display in their glory in the brand new video for “World Set Alight,” a true visual treat that uses a deft artistic approach to make something so much more than just your standard performance video.

When it comes to knocking out amazing videos most artists lean heavily on a director or contact whom they believe shares their vision. Fortunately for MAKO, Declan himself is a skilled videographer and took upon himself the task of making the “World Set Alight” video. Urban landscapes and gothic imagery are processed into a bold animation format that forms the backdrop to MAKO performing in the same artistic style. It’s a surreal looking piece, but the bold colors and daring animation choices keep a cohesive look that explode off the screen and leaves an indelible mark on the memory of the viewer.

Here at HIP we’re always excited to help create awareness and opportunity for exciting new artists and we are confident that you and your viewers will love “World Set Alight” and MAKO as wholeheartedly as we do! Please contact Andy Gesner and the HIP Video Promo crew at (732)-613-1779 or email us at info@HIPVideoPromo.com for more info on Mako.