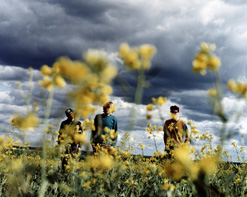 Pop punk can mean a lot of different things nowadays. From scenesters to memories of good times passed. However, we’ve been granted the opportunity to present you with an inventive London Sub Pop band that gives a whole new meaning to what pop punk can sound like. It’s Andy Gesner, here with another trend setting artist from Sub Pop Records that combines fuzzy and raw punk elements with subtle British pop hooks, Male Bonding and their one frame video for “Tame The Sun.”

Life has moved at a fast clip for Male Bonding, a trio from London since the 2010 release of their debut album, Nothing Hurts. The rest of the year was filled with relentless touring across Europe and the UK, miles and miles of American blacktop, and a volcano-mandated sojourn in the unfamiliar climes of Los Angeles. The band was beloved by the media, with The Guardian, and Pitchfork placing Male Bonding into their “Best New Music” categories. Male Bonding has even collaborated with Weezer’s Rivers Cuomo on a song! The trio now enters with a bang to dispel any possibilities of a sophomore slump, as their new record Endless Now wins over critics across the board. SPIN gave the record an extremely high mark, falling in love with the album’s “all battering drums and youthful, melodic confusion.” Pitchfork, matched in enthusiasm, praises the band’s “a big, beating pop heart underneath its scrapes and bruises, and here the hooks are plentiful.” Endless Now was recorded in the same upstate church where Dinosaur Jr. made 1993’s Where You Bee, and was produced by was famed indie producer du jour John Agnello (Dinosaur Jr., Kurt Vile). It’s no wonder the record was also very well received by NME, Stereogum, Consequence of Sound, and many more.

“Tame The Sun” is an example of how this band isn’t afraid to evolve and grow into their new sound. New timbres like piano, cello, and the Mellotron all factor into the sound, and there are more guitars than ever before. “Tame The Sun” is what pop punk is supposed to sound like, both, raw and polished at the same time. Don’t mistake this for your Pro Tool-ed New Found Glorys’ or All Time Lows’, Male Bonding is fully uncooked, washed out, and British, with a sound that leans closer to The Cure or Bloc Party than it is to what we are used to from the genre here in the States. The video is all shot in one take, cycling through pictures hanging on a wall. However, some of the photos have “Scooby Doo” style cutouts from which the band members pop out to sing the song. This effect creates a mesmerizing and welcome drop of humor to a song that is otherwise rather melancholy.

We are absolutely stoked to have the opportunity to show off another Sub Pop group that deserves all of your attention. It is very rare when a band comes along and flips the genre on its head by breaking out of all of the expectations associated with it. Male Bonding will rock your pop punk heart, guaranteed. We’ve got copies of Endless Now here for your listening and contest needs, so reach out. If you need more info, call Andy Gesner at 732-613-1779 or e-mail us at info@HIPVideoPromo.com. You can also visit www.SubPop.com to find out more about Male Bonding and their tour dates this fall.