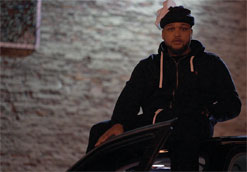 Seattle is the most geographically remote of any American city, and perhaps because of its isolation, it’s developed a rap subculture unlike any other. From Sir Mix-A-Lot to Macklemore to DoNormaal, Emerald City hip-hop has always been notable for its idiosyncratic storytelling, its humor, its huge personalities, and its unflinching commitment to honesty. In this regard – and in many others – MariBased1 is truly a man of his town. Along with his label chief and fellow artist Mr. Benjamin, he’s a proud champion of Seattle hip-hop. These two know exactly who and what they are: they’re carriers of a winning tradition, and part of the next wave of Pacific Northwest hip-hop.

And while he may not be well-known nationally (yet), in his hometown, MariBased1 has already arrived. He’s an award-winning, hard rhyming, straight-to-the gut emcee with a distinctive flow and vivid stories of the Seattle streets. His Mariotto Volume 1 mixtape is more of what has made him locally famous: tight, tough, illuminating narratives, bumping beats, and undeniable star presence on the microphone. “Doe Boi”, his latest single, is a prime example of his economy and his focus – there’s not a wasted word or beat. He works fast and pulls no punches. He’s got something he wants to put across, and once he’s accomplished his goal, the song is over. There’s nothing left to say. He knows you’ve been spoken to.

The topic at hand is the hustle, and MariBased1 and Mr. Benjamin deliver their tale with complete candor and grim determination. In order to bring this story to life on the screen, the rappers have turned to another local of renown: Sonny Bonoho, who also records as WRLORD. The Tacoma-based artist isn’t just a video director – he’s a rapper, too, and one who has been praised for his uniqueness and his characteristically Northwestern wit by XXL’s “The Break”. Sonny Bonoho’s own videos are hallucinations; they’re simultaneously seductive and bizarre, and they radiate menace, even as the beckon the viewer closer.

He’s brought that same dreamlike quality to his clip for “Doe Boi”. The artists showcase a side of Seattle that few tourists see – the squat houses, sparse scrub vegetation, and gated corner stores of its low-income neighborhoods. In a place as stark as this, special effects aren’t needed to create and sustain a mood, and Sonny Bonoho gets great emotional mileage out of shots of lone streetlights, dark parking lots, deserted intersections, and wrought iron. To deepen the nightmare, he slips a white mask over MariBased1’s face. Quick cutting and ghostly super-impositions reinforce the mystique. The result is a two minute and twenty-five second plunge into MariBased1’s world – a trip as intense and immersive as the Mariotto Volume 1 mixtape itself.

Here at HIP Video Promo, we’re elated to team up with MariBased1 and Mr. Benjamin to share “Doe Boi” with the world! We hope you embrace this clip as much as we have and consider including it in your programming and online presentations in a timely fashion. Rest assured we’ll have plenty of MariBased1 and Mr. Benjamin merch available for on-air contests and giveaways, so don’t hesitate to get in touch if you’d like to get your hands on some. For more information on MariBased1 and Mr. Benjamin, please contact Andy Gesner and the HIP Video Promo team at (732)-613-1779 or email us at info@HIPVideoPromo.com. Visit www.facebook.com/Maribased1, www.facebook.com/Mr.Benjamin2008, www.instagram.com/maribased1, or www.instagram.com/mrbenjamin2008 for the latest updates.