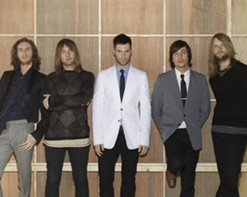 Greetings rock video aficionados, it’s Andy Gesner and the staff from HIP Video Promo, back with another grand slam clip that is sure to explode nationwide. The modern pop music landscape is so strictly segmented that true crossover acts are rare. How many bands can boast an adult pop following, an R&B following, and a devoted indie rock following – and are still able to reach a young audience? No, there aren’t many groups with the versatility or widespread appeal of Maroon 5. You can hear their hits on the hippest radio stations, at dance clubs, at the supermarket and the shopping mall and in high school parking lots. Your mom knows the words to their songs – and chances are, your children do, too. It’s telling that “Makes Me Wonder”, their latest single, made a splash on the Hot Adult charts right as the band was preparing to play it for the 2007 Kids Choice Awards.

Songs About Jane, their 2002 debut, sold more than ten million copies worldwide, and added three new pop-rock standards to the American songbook: “Harder To Breathe”, the bracing “This Love”, and the United World Chart-topping “She Will Be Loved”. The band’s easy synthesis of classic Seventies acoustic soul, hip-hop and gospel, Eighties-inspired dance rock, and contemporary R&B marked them as pop alchemists of distinction. Such is the flexibility of Adam Levine’s songcraft that Jane tracks have been re-recorded by popular bands in Korea and Japan; back home, Kanye West produced a high-profile remix of “This Love”. (Later, Levine returned the compliment by contributing the hook to West’s “Heard ‘Em Say).

On It Won’t Be Soon Before Long, the follow-up to the multiplatinum Jane, Maroon 5 has upped the ante considerably, coming out louder, funkier, edgier, bigger, and brighter than ever before. Songs About Jane revealed a strong Stevie Wonder influence; that’s still apparent here, but the band has been informed by Prince, Saturday Night Fever-era Bee Gees, Michael Jackson, Talking Heads, and some of their more rocking touring partners (The Rolling Stones, The Thrills, Phantom Planet). Levine has also broadened his lyrical perspective, adding a dash of social critique to his usual astute verse about deteriorating relationships and sexual longing. “Makes Me Wonder”, the irresistible lead single, includes some commentary of the Bush Administration and the current climate of political distrust, veiled within a story of romantic betrayal. The track has already stormed the airwaves, hitting the Adult Top 40 within two weeks of its release.

Since the success of Songs About Jane, Maroon 5 frontman Adam Levine has (perhaps reluctantly) joined Justin Timberlake and Pharrell Williams in the front rank of contemporary hit-radio heartthrobs. Levine, guitarist James Valentine, synth player Jesse Carmichael, and the rest of the group are now legitimate celebrities in spite of – or maybe because of – their relaxed approach to the spotlight. Certainly, their videos have helped: the famous clips for “This Love” and “You Will Be Loved” are among the sexiest shorts ever aired on MTV. Levine proved himself a flexible romantic lead as well as a charismatic frontman, and made hundreds of thousands swoon with his provocative star-turns in Maroon 5 videos.

Consequently, expectations for the “Makes Me Wonder” clip have been running high – and the band has delivered. Maroon 5 has made over LAX into a futuristic disco-airport hybrid, complete with bright neon, performing acts, and some of the most alluring flight attendants you’ll ever see. The band looks terrific, too; decked out in crisp suits and playing in front of a stage-lit terminal, they look as if they’re about to achieve escape velocity through the force of their beats and riffs. But it’s when Levine tries to get through security – and is physically searched by the sexy personnel – that things really heat up!

We have been on a true winning streak working together with Civia Caroline and all of the good folks at A&M/Octone, and this clip is sure to make it’s mark at the top of the list. If you need more info, call Andy Gesner at 732-613-1779 or e-mail us at info@HIPVideoPromo.com. You can also visit www.amoctone.com, or www.Maroon5.com to find out more about Maroon 5.