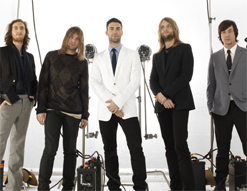 Greetings to my esteemed programming friends! It’s Andy Gesner and the staff from HIP Video Promo, back with another clip from one of the world’s favorite pop bands. For us here at HIP, having the chance to work with Maroon 5 earlier this year was undoubtedly one of the year’s great pleasures. Not only are their singles irresistible, but they display a dedication to video art that’s rare even among rock stars. Viewers can count on two things from a Maroon 5 video: a Hollywood-worthy performance from telegenic frontman Adam Levine, and lots of shots of beautiful women. The clips from Songs About Jane, the band’s multiplatinum debut, earned Maroon 5 a reputation for racy imagery – and the first video from It Won’t Be Soon Before Long did nothing to dispel that notoriety. Now comes “Wake-Up Call” – the latest clip accompanying the latest worldwide smash – and it is, by our own estimation, the most characteristic video they’ve ever done.

It’s also the nicest to look at – and considering the amount of pure eye candy their other clips contained, that’s really saying something. Veteran video director Jonas Akerlund (Madonna, Metallica, The Rolling Stones) presents “Wake-Up Call” as a trailer for a fictitious film starring Maroon 5. The production values here are stunning: “Wake-Up Call” really does feel like excerpts from a big-budget action flick, and the members of Maroon 5 do double as the sort of edgy character actors who might fill out the cast of a summer blockbuster. The band and the director are following the lead set by Levine’s cinematic lyrics: the Maroon 5 frontman’s story of betrayal, emotional excess, and crimes of passion seems tailor-made for Hollywood. That Levine sings it all with drama, flair, and black humor only adds to the Tinseltown glamour of the video.

The song itself is just the latest international success for the stylish quintet. “Wake-Up Call” has already charted in more than twenty different countries, and, in testament to Maroon 5’s widespread appeal, made the Top 10 in countries as dissimilar as Lebanon, Poland, and the Netherlands. It Won’t Be Soon Before Long earned Maroon 5 their second straight platinum disc, and topped sales charts in the United States and the United Kingdom. In the week of its release, It Won’t Be Soon shattered the sales records on iTunes, and lead single “Makes Me Wonder” hit #1 this June and was, arguably, the song of the summer. The record has been critically-lauded, too: in an All-Music Guide rave, Stephen Thomas Erlewine called it “that rare self-stylized blockbuster album that sounds as big and satisfying as was intended.”

Akerlund’s clip shoots high, too. Maroon 5 has never been shy about nodding toward classic movies – the video for “She Will Be Loved” was loosely based on The Graduate – and “Wake-Up Call” is a pure caper flick, complete with sun, skin, and hot-blooded murder. Titles, too: Akerlund lets song lyrics take the place of the film credits. But this is Adam Levine’s show, and he makes the most of it: in a series of dramatic scenes, he busts in on his lover with another man, kills him, and then enlists the members of Maroon 5 in an attempt to cover up his crime. Of course, there are sexy girls aplenty, running toward the camera in bikinis, tied-up provocatively in the back of a speedboat, and playing poker at a bar. Eventually the plot unravels, and despite a truly spectacular car explosion, Levine’s hot temper lands him in the slammer. .

Huge thanks are due to Simi Dube and the entire A&M/Octone crew for bringing us on board to help promote this cinematic gem! Thanks to them, we also have a handsome number of copies of It Won’t Be Soon Before Long in our possession for all of your on-air giveaway needs. If you need more info, call Andy Gesner at 732-613-1779 or e-mail us at info@HIPVideoPromo.com. You can also visit www.AMOctone.com, or www.Maroon5.com to find out more about Maroon 5.