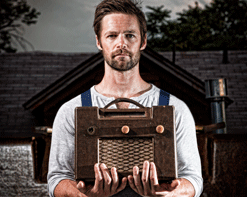 Matt Hoffman is an American folk rock musician who has just recently launched his very own solo career. With inspiring musical melody, his music captures an essence of natural and classic folk music. HIP Video Promo is proud to present his most recent music video clip “Mural.”

Know for being the founder of the band Strange Americans, Hoffman’s new solo career has begun to take off. Following the success of Strange Americans’ 2012 release A Royal Battle, Matt focused on a solo live and recording project, which resulted in the forthcoming EP Lateral Moves. Hoffman performed and recorded nearly every instrumental and vocal track on the record, leading to the success of the new album.

The songs dive “deeply into an honest exploration of the human experience and emotion, advocating a raw and simple, yet meaningful perspective.” On stage, Matt performs his solo act while delivering renditions of songs that flow with emotional ease. This Denver native echoes inspirations that are tied to contemporary musicians such as Ryan Adams, Nathaniel Rateliff, Josh Ritter, and Joe Pug. Hoffman’s music is a timeless salute to modern folk music, and from the forthcoming EP Lateral Moves, we present “Mural.”

This creative music video shows imagination coming to life. With scenes rich with humor and joy, viewers are captivated by the inspiration that ensues. “Mural” depicts the powerful process involved in creation by presenting us with the visions of a young painter. When she steps outside, she confronts a world filled with imaginative scenes—from fairy tales to ninjas, she creates a joyful atmosphere in which she can paint. When she returns to her blank mural, ideas begin to flow in ways that cannot be described. The song itself is a sing-songy anthem that is reminiscent of classic folk and indie music.

Timeless and full of imagination, Matt Hoffman’s music echoes classic and beloved music. For more information on this new artist and his video “Mural,” please contact Andy Gesner and the HIP Video Promo staff at (732)-613-1779 or email us at info@HIPVideoPromo.com .