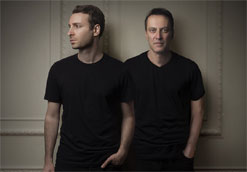 In the past few years, the art of the lyric video has progressed mightily. Directors no longer project words on a black screen and leave it at that – instead, they’ve been finding innovative ways of inserting text into their frames. But we’re willing to bet that you’ve never seen a lyric video as beautiful, entertaining, or creative as MaWayy’s animated clip for “Blame”, their latest single. This lyric video isn’t just thoroughly legible, it’s hypnotic, exciting, and compulsively re-watchable, too. The words are so seamlessly integrated into the action that the “Blame” clip feels every bit as dynamic as any recent non-lyric video we can think of.

It helps that “Blame” is as straightforward and as strong as it is. MaWayy doesn’t mince words: they mean to get you moving, and singing along, as quickly as possible. The international electronic music duo specializes in powerful first impressions. “Wrong”, their prior single, lit up dance-floors all over the world in the summer and autumn of 2017. The Huffington Post hailed the song as “sizzling electropop”, and its sunny Mediterranean vacation of a music video swiftly garnered more than a million views on YouTube.

“Blame” contains all of the elements that made “Wrong” a success: an instantly memorable melody, an impassioned vocal performance, explosive beats, and a dizzying drop. From its 1.4 million views on Youtube and 1.1 million streams on Sportify, #42 on the Billboard Dance charts, No. 1 record on WCPY ‘Dance Factory FM’ Station in Chicago, and feature on Spotify’s biggest Electronic Playlist ‘Mint’: to those qualities, MaWayy adds a palpable sense of romantic urgency. There’s real heartbreak and longing here, and when the chorus hits, it’s a safe bet you’ll get swept up in the drama.

The new single is the latest fruit of a long-distance collaboration. Brian Wayy is an Angeles-based producer and pop remixer who has contributed music to countless television programs. Masoud Fuladi, is one of the most heralded EDM artists in his native Iran. They appear in the “Blame” video as animated illustrations; cartoons these are, but the images do manage to capture some of the intensity that these two can generate.

The rest of the lyric clip is nothing short of a thrill ride. Phrases from the song adorn the sides of tall buildings as a car speeds through a city. A stairway made of words ascends to a great blue beyond. Images implied by the verses – a rope, a struck match, a clock, a great brick wall – become canvases for MaWayy’s writing. Everything travels at breakneck pace: words shoot out at the viewer as the camera sails through space. When the song reaches its drop, a great red “ME”, shadowed like Stonehenge, hovers in a bubble – and hands of blame, made out of letters, point directly at it. Everything is present, unadulterated, and unapologetic.

Here at HIP, we’re elated to work with MaWayy once again to promote their brand new visual for “Blame.” We would love to see this clip included in your programming and online presentations in a timely fashion, so please check it out as soon as you can. Rest assured we’ll have plenty of MaWayy merch available for on-air contests and giveaways, so don’t hesitate to get in touch. Please contact Andy Gesner and the HIP Video Promo team at (732)-613-1779, email us at info@HIPVideoPromo.com. You can also visit www.MaWayy.com for more info.