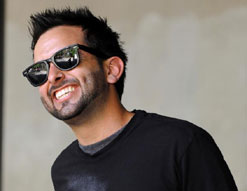 Hello programming friends, it’s Andy Gesner and the staff from HIP Video Promo, and no matter how grey it might be outside, we’ve got a clip that’s practically guaranteed to make you laugh. Sometimes a song and a video make a social statement so strong that it can’t be ignored. Medium John makes such an important statement with this clip. Yes, Medium John prides himself on keeping the jokes — and the electro-funk — coming non-stop. But he’s not too giddy to give us a quick, instructive history lesson on his latest single. Over a solemn-sounding choir, Medium John preaches that “with the invention of the Internet comes endless porn”. Truer words have rarely been spoken. And who among us could deny taking (at least) occasional advantage of this immense international resource?

And that’s what makes listening to Medium John’s music so much fun — he’s shameless and proudly sophomoric, so you don’t have to be. Moreover, like The Lonely Island and Flight Of The Conchords, his parodies of contemporary music are grounded in firm knowledge of pop history: Medium John really loves the R&B, funk, ’80s new wave, and techno traditions he’s sending up. When he sings about the “pressure building ” in bed with his lover in the Justin Timberlake-like “The Smell Of Love”, it’s genuinely surprising — and therefore genuinely funny — that he’s talking about stomach gas. “It’s Definitely Gonorrhea” cleverly folds “Tears Of A Clown” into a tale of venereal disease run wild. It’s all something Medium John calls “crotch-pop” — sharply-produced, radio-ready songs about heretofore taboo subjects.

We are very excited to be working closely with Barry Bergman and the good folks at Mondo Melodies to bring you this hilarious new clip. For more info, call Andy Gesner at 732-613-1779 or e- mail us at info@HIPVideoPromo.com.