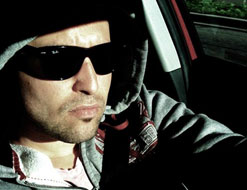 Hello cherished programming friends, it’s the HIP Video Promo staff with a clip as bizarre as it is laugh-out-loud hilarious. Out of Toronto, Ontario comes the Canadian answer to every bit of pop and dance music you might have heard on the radio in the last three years – Memobaa. Memobaa is a one man dance pop sensation who simply shatters the rules of the genre and mocks it at every step. “Ladies International” starts out with a simple thumping beat, but as soon as Memobaa jumps into the scene, it becomes evident that he’s taking you for quite a ride.

From the opening line, Memobaa enters with a smile and sneer for everyone with his standout accent and tremendous confidence as he dedicates his track to “beautiful girls from all around the world.” His sound and delivery seems as serious as it does absolutely tongue in cheek, reminiscent of Ill Mitch with a hint of 90’s German techno superstar Scooter, which makes you wonder if Memobaa is the Sex Pistols of modern dance pop. Memobaa disregards tempo, pitch, and, most importantly, any respect for social graces! The song hollers to girls from every country of the world and never fails to point out that these women have two things in common: yes, you guessed it, their stunning good looks and their weakness to men with money. In its own unique way, Memobaa mocks the conventional boundaries of pop music and functions of social overindulgence by making us laugh, while he shreds them to pieces. This brilliant display of awareness for what is acceptable and total disregard for it is what makes Memobaa’s “Ladies International” stand out from the crowd.

Of course, a song of this caliber cannot travel without its equally over-the-top music video accomplice. Taking notes from sleazy Top 40 clips, “Ladies International” brings on the girls of all shapes and colors as they dance the night away to their unrestrained heart’s content. This is where Memobaa truly shines and avoids common satire traps and clichés many of his predecessors have failed to avoid. First and foremost, the girls are exceptionally attractive! While the usual suspects in this genre mock the culture of seduction by including intentionally unflattering characters, Memobaa is embraced by gorgeous models, giving this sugary clip the right amount of spice. Another very important trait of this video is that it is never goofy. Memobaa knowingly keeps any form of geeky fallacies from popping up throughout the entirety of his sexual deviancy. This creates an element of sincerity and allows us to laugh with our lovable narrator and not at him.

At first glance it is easy to overlook the subtleties Memobaa plants in his work and just enjoy the song and video for the good time that it is. And that, ladies and gentlemen of the programming world, is what makes this song irrevocably multi-dimensional.

We are thrilled to be working with an artist as clever and exciting as Memobaa and hope you find this titillating clip a perfect fit for your lineup. We’re here to hook you up with all things Memobaa, so please don’t hesitate to be in touch! If you need more info, call Andy Gesner at 732-613-1779 or e-mail us at info@HIPVideoPromo.com. You can also visit www.Memobaa.com to find out more about Memobaa.