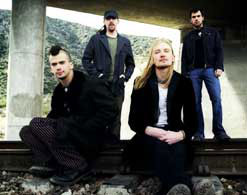 Hello to all of my fellow music video lovers, it’s Andy Gesner and the staff here at HIP Video Promo! Spring is here in earnest, and it’s time to throw open all of the windows and blast loud rock and roll. So we’re thrilled to be working with our friends at Atlantic Records again to bring you three brand new clips from state-of-the-art modern rock bands. These are the songs that’ll be highlights of commercial rock radio sets in Summer 2006 – those bashers you’ll hear out of car windows, beach stereos, and amusement park P.A. systems. Mercy Fall might not be a name you know yet, but if you’re a fan of the hard stuff, it’s a sure bet you’ll soon be familiar with the Flagstaff quartet. Their music feels inexorably bound for heavy rotation.

To our ears, “I Got Life” – the Mercy Fall debut single – sounds like an instant heavy rock classic. The subject matter is anthemic, the beats and riffs are gigantic, and the execution is flawless. Like Live or Soundgarden – two bands that the members of the Arizona quartet plainly appreciate and strive to emulate – Mercy Fall supplements their wattage with impressive melodicism. The composition of “I Got Life” is fiercely streamlined: all the controlled fury and explosive energy of the recording is harnessed in the service of singer Nate Stone’s impassioned statement of purpose. Drummer Ethan Rea brings pyrotechnics behind the kit, bassist Kieran Smiley lays down a sinuous groove that forms the bedrock of the song, and guitarist Jeff Lusby launches into a ferocious wah-wah solo (and then continues tasteful commentary throughout the second verse), but it’s Stone’s dramatic vocal performance that breathes the spirit into the track.

“I Got Life” isn’t the only radio-ready song on For The Taken, but it is probably the most straightforward. Elsewhere on the set, Mercy Fall proves unafraid to explore adventurous detours – fusions of atmospheric rock, uncompromising Nineties grunge, and modern metal, for instance. Produced by Howard Benson (P.O.D., My Chemical Romance), For The Taken nods to its forerunners, and then charts out fresh territory. In concert, Mercy Fall is even riskier, regularly pushing their performances to the brink in an ongoing, furious effort to connect with audiences. Currently sharing stages with like-minded bands such as Flyleaf, Halestorm, and Trapt, Mercy Fall maintains the heady concert schedule of true road warriors. The quartet has been touring nonstop since 2004, and shows no sign of slowing down.

We’re pleased that Atlantic has matched Mercy Fall with one of the best and most experienced video directors in the business. Darren Doane began his career fifteen years ago as a guerilla filmmaker – a kid with a camera who hung around heavy rock and punk shows and shot bands for free. Since then, Doane has directed clips for more than three hundred bands, including Blink-182, the Deftones, Pennywise, Thursday, and AFI. Yet no matter how successful he’s become, his underground proclivities still show: his instincts guide him to capture the intensity of a band’s performance, and to use light and color to throw the group’s kinetics into relief.

That’s exactly what Doane has done with “I Got Life”: he’s brought out Mercy Fall as a genuine force, playing their song with gravity and poise. Nate Stone wields twin microphones – one on a hooked stand, and another in his right hand. He switches between the mouthpieces, alternately bellowing into them and addressing them with a studied, diagnostic delivery. Meanwhile, Doane cuts frantically between shots of the band playing, sending his camera sliding between the groupmembers and superimposing shots of the instrumentalists beside images of the singer. Deep reds and cool blues flood the background of the stage, and streams of white light slash across the frames. This could be a classic clip from Pearl Jam or Alice In Chains – so vibrant and authoritative is this cut.

Here at HIP, we feel very honored and privileged to be working with Diane Van Horn, Jason Pleskow and all of the good folks at Atlantic Records once again. You can catch Mercy Fall this Spring with Shinedown, Trapt, and Halstorm on the Equinox tour, and then into the summer with Seether and Faktion. Please let us know if you would like to set up interviews when the band comes near you. Also, we will have plenty of copies of For The Taken on hand for all of you on-air giveaway needs. If you need more info, call Andy Gesner at 732-613-1779 or e-mail us at info@HIPVideoPromo.com. You can also visitwww.AtlanticRecords.com, or www.MercyFall.com to find out more about Mercy Fall