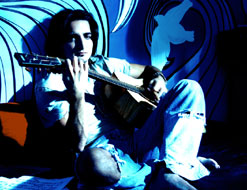 Hey, everybody, it’s Andy Gesner and the tireless staff from HIP Video Promo, here with the second video from the debut album by an adventurous and progressive young musician. Months ago, it was our privilege to introduce you to Merlinmoon. You’ll remember his striking clip for “Poppy Fields”: a trip through the singer’s altered consciousness, and a bold literalization of the deep psychology behind the song’s lyrics. Atmospheric, suggestive and entrancing, the “Poppy Fields” clip revealed an artist in full command of formidable conceptual gifts — a very good thing to have, considering his influences and sources. Consider Merlinmoon a true classic rock band in the modern era: one indebted to the art-rock masters of the Sixties and Seventies, but one in possession of his own personal voice. No trend-following for Merlinmoon — he’s chasing a timeless sound.

Consider, for instance, “Yesterday Is Gone”, the lead track from the evocatively-titled Stoned By Dreams. It’s awash in feedback-drenched guitar, radiant synthesizer, delicately-struck piano, and dramatic drum fills; the chord structure is intriguing, the melody is acrobatic, and the musicianship is superb. But it’s also a thoughtful and philosophical rumination on Merlinmoon’s principal themes: self-determination, the passage of time, and the necessity and persistence of creative action. He sings it all in a voice that simultaneously conveys presence and detachment — it’s a classic-sounding performance, and one perfectly in keeping with the magisterial sound of the track. Accomplished, poised, and, above all, ambitious, “Yesterday Is Gone” is a recording that would have fit in perfectly on an FM playlist in ’73.

Which isn’t to say that its appeal will be lost on contemporary audiences. On the contrary — as the Venezuelan-born Merlinmoon gigs around the world, his international popularity grows exponentially. This spring, Merlinmoon appeared at ultra-hip Coachella; this summer, positive press notice for Stoned By Dreams continues to accumulate. Autumn promises more gigs in the States and an elevated profile for one of independent music’s brashest mavericks.

Merlinmoon has said that “dreams are the ultimate drug”, and in his clips, he explores the borderland between the conscious and unconscious, symbol and referent, sleep and wakefulness. The “Yesterday Is Gone” video is pure head-trip: images double, delay, fade to gray, melt, and twist, and do so before a backdrop of brilliant white light. Everything seems slightly slowed-down and distorted — humans in motion become mobiles, action-silhouettes, works of art. Mirrors divide bodies in half, and video effects do the rest: you’ll think you’re looking at an abstract design until you recognize a torso, or a hand, or a face singing. Even an image of two people of indeterminate gender kissing feels more like a strange and fascinating sculpture than an erotic suggestion. In one particularly arresting shot, his face dissolves to a tableau of fireworks in the sky — only these pyrotechnics are running in reverse, folding back on themselves, dwindling and vanishing into the darkness of past happenstance.

We’re very excited to be working with Merlinmoon once again to bring you his second music video. If you need more info call Andy Gesner at 732-613-1779, or email info@HIPVideoPromo.com. You can also visit www.Merlinmoon.com to find out more about Merlinmoon.