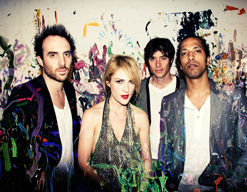 Hey pals, it’s Andy Gesner and the HIP Video Promo staff, thrilled to keep spreading the word about one of the world’s most remarkable bands. We’re also pleased to report that Americans are finally figuring out what our neighbors north of the border have known for years: Metric creates music that is absolutely indispensable. Fantasies, the new album, made the Top 100 in the U.S. and is still gathering momentum (it hit #6 in Canada); “Help, I’m Alive” reached #21 on the Modern Rock Charts and is still climbing (it hit # 1 in Canada). The set also took the top position on the Billboard Heatseekers chart, and held its position in the indie Top Ten for weeks. The band has appeared at festivals across America (including a wildly-received turn at Coachella and All Point West), toured through Europe, and they’re preparing for their first foray Down Under – where Fantasies has also charted in the Top 50 best sellers chart. Album track “Front Row” was featured on a recent episode of Grey’s Anatomy, “Gold, Guns, Girls” will be featured in an upcoming episode of Entourage, and a week ago Metric made their first appearance on The Late Show w/ David Letterman.

Perhaps what’s most inspiring about the Metric story is that they’ve done it all themselves. As was recently reported in a New York Timesarticle about the band’s unconventional success story, the Toronto quartet turned down several lucrative recording contracts from majors, determined to bring their music directly to the fans. Back home in Canada, they’ve become one of the first truly-independent bands to earn a nomination for the prestigious Polaris Award – Fantasies is on the short list for Album Of The Year. Uncompromising as they are, they’ve become rock stars anyway; frontwoman Emily Haines in particular, whose distinctive singing, allusive and poetic lyrics, adventurous synthesizer, and stunning appearance have made her a heartthrob among the indie-rock set.

Haines is a natural in front of the camera, and her performances in Metric clips are invariably arresting: her turn in the video for “Poster Of A Girl” (from Live It Out) was named by Much Music one of the sexiest of 2006. But there’s nothing generic or passive about her sexiness – it’s edgy, personality-driven, wholly-embodied, intense, even a bit scary. Haines shines in both of the videos we’re sharing with you today: the kaleidoscopic clip for “Help, I’m Alive” (a surprise gift to the band from a filmmaker friend) – the band’s current single – and the impromptu spot for the wildly-catchy “Sick Muse” (shot spontaneously one evening in a friend’s apartment).

Directed by fellow Canadian artist Deco Dawson – named one of the 25 best young filmmakers in North America byFilmmaker Magazine – the “Help, I’m Alive” clip is a swirling, hypnotic pastiche of suggestive images, instructional footage, and live film shot during Metric’s 2008 tour. Explosions morph into beating hearts; black and white stars pulse; anatomical diagrams slide into abstract designs; and through it all, Haines shakes a tambourine and holds a mass audience spellbound as she sings. It’s dizzyingly exciting, and a pretty fair approximation of the sort of altered state that this band can generate in concert. In contrast, during the “Sick Muse” clip, the band is by themselves in a barren room. Their interactions, however, are so characteristic and fascinating that the clip proves every bit as spellbinding as the one that accompanies “Help, I’m Alive”. Bandmembers walk in and out of the frames, shoot each other telling glances as they perform, play with sparklers, fish around in pockets for picks, and radiate intelligence. In a series of shots, Haines attempts to capture the attention of the drummer as he plays; he looks up from time to time, but only after she’s danced out of the frame. Finally she puts the exclamation mark on the video by kicking over his snare!

It’s a true pleasure to once again be working in tandem with the Metric team, who are showing themselves to be one of the most dedicated and hard working in the business. Huge props to Matt Drouin, Fuzz deGrandpre and Rosie Taylor for getting us everything we need to bring you these stellar clips. If you need more info call Andy Gesner at 732-613-1779, or email info@HIPVideoPromo.com. You can also visit www.ILoveMetric.com to find out more about Metric.