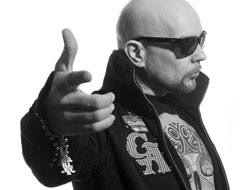 Greetings programming friends, it’s Andy Gesner, coming to you from HIP Video Promo headquarters with a dramatic new hip-hop clip from north of the border. We know these have been hard times for everybody: the world economy might be recovering, but we’ve still got a long way to go. Folks are hurting, and doing whatever they can to get by. But we’re fighting back, and so far, we’re surviving. “Doesn’t Really Matter,” the latest song from respected emcee Mic Boogie, is the perfect anthem for the moment. It’s a vivid depiction of tough economic conditions, an acknowledgement of the difficulty of overcoming them — and a declaration that we refuse to go under.

If you haven’t already heard of Mic Boogie, it’s a sure thing you will soon. The rapper combines the lyrical acumen of Talib Kweli with the roughneck commercial appeal of Pitbull. He’s hilarious when he wants to be, angry when he has to be, politically engaged when it’s necessary, and self-possessed and authoritative pretty much all the time. Sure, he’s deft on the microphone, but that’s not what distinguishes him. Every time he kicks a verse, he’s got something important, or provocative, to communicate — and again and again, he succeeds.

Mic Boogie represents Oshawa, an Ontario city that’s best understood as the Detroit of Canada. Oshawa is gritty, it’s been through some tough times, and it’s the seat of the Canadian automobile industry. Growing up in blue-collar Oshawa gave Mic Boogie a taste for heavy music (as well as roughhousing), and he puts it to good use on “Doesn’t Really Matter.” The backbeat, augmented by guitar and ominous synthesizer, is slamming — the perfect meeting point between rap and rock. The song showcases another piece of Ontario pop history: Mark Holmes, lead singer of Toronto glam-rockers Platinum Blonde and owner of the hip Mod Club Theatre, croons the hook.

The focus, however, is on Mic Boogie’s lyrics, and his hard-eyed working-class storytelling. “CEO of your company, he’s living comfortably/ still got his bonus check for a couple hundred G’s,” he rhymes, “while you’re nothing but a number in the E.I. line.” The clip for “Doesn’t Really Matter” echoes these frustrations: it follows the course of an insurrection on the floor of an automobile factory. Directed by veteran Toronto filmmaker Marc Andre Debruyne, who has made close to one hundred music videos for Canadian artists; he understands the iconography of hip-hop video, and he presents Mic Boogie as the spirit of rebellion. Debruyne shoots the rapper in a factory locker room — rarely is his face directly illuminated. Instead, he speaks his explosive verses from the shadows. His peers on the assembly line hear him, though, and by the end of the confrontational clip, they’ve picked up their tools to demand what’s rightfully theirs.

We are very excited to be working once again with the crew at Costa Music to bring you this stellar new clip. We are here to hook you up with all things Mic Boogie, so please don’t hesitate to be in touch if you need anything at all! If you need more info, call Andy Gesner at 732-613-1779 or e-mail us at info@HIPVideoPromo.com.