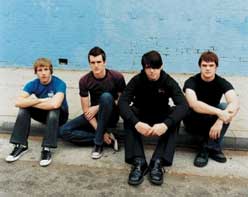 Greetings to all of my esteemed video programmers across the country! It’s Andy Gesner and the staff from HIP Video Promo with another tremendous music video that is completely worthy of your undivided attention. Today, we’re super excited to be working with Atlantic Records to tell the world what rockers in the Southeast know well: Moments In Grace are ready for the big leagues. This Floridian four-piece has been lighting up stages throughout the region (and increasingly across the country) and leaving audiences breathless with a stunning combination of symphonic poise and sheer rock power. Moonlight Survived is the aching, astral debut, and the majestic “Stratus” is the lead track, first single, and smashing opening volley.

A featured performer on this summer’s Warped Tour, Moments In Grace has shared stages with kindred spirits Mae, Seether and Finger Eleven. Comparisons to these and other emo-rock bands are appropriate – but only as a direction. Where many modern rock acts are content to crank the amplifiers up to eleven and get by on volume and effrontery, Moments In Grace balances the guitar attack with equally sweeping string passages. These “moments” are integrated into the frequently harsh terrain of the songs; and when they come, they push the textures and contours of these modern rock tracks in unexpected directions.

“Stratus” is a textbook example of the group’s approach. A grand midtempo rocker in waltz time, “Stratus” is a study in opposites: it’s alternately loud and quiet, rough and delicate, electric and symphonic, ethereal and earthy-gritty. Frontman Jeremy Griffith single-handedly holds both sides of the group in tension – he possesses a head-voice as emotive and powerful as his shout, and he slips into the falsetto frequently, and effortlessly. On “Stratus”, lines that begin in a guttural shout morph into a wispy purr, as Griffith’s winsome vocals float above the thunderheads of rhythm guitar. Similarly, the modern rock storm clears away for verses that are little more than Griffith and the understated, elegant string section. But the calm never lasts for long – the band cascades back in for the bone-rattling choruses, and Griffith’s shout takes on a desperate, heartbroken cast. Finally, the symphonic and electric sides of the Moments In Grace personality meet in a damn-the-torpedoes outro where guitarist Justin Etheridge takes a skyscraping lead over a bed of slammed snare and mounting strings.

The band’s double-sided identity is explored further in the “Stratus” clip. Director Laurent Breit shoots the band through a blue-green filter. Although Moments In Grace perform outdoors in semiarid terrain, the camera effect suggests an aquatic locale. As the band slashes through the song, the atmosphere takes on an electrical current – static charges, emanating from the performers, flash across the screen. The camera peeks through the sparse foliage of a desert tree, and luminescent butterflies scatter in flight from its branches. They struggle upward through the heavy blue air like silverbacked fishes desperate to surface.

Yet while the performance footage is tinted sea-blue, the other half of the clip – footage of young couples surveying the band, the terrain, and the open sky from the shelter of adjacent rocks – appears russet and extraterrestrial. Here is another landscape seen through an infrared lens; a lunar vista stark under a black, starry sky. The insects that walk this surface are kept sharply in focus by Breit, and we contrast these to the incorporeal butterflies of the blue-green setting below. The young men and women who populate this arena stare blankly, hopefully; they gaze up at the sky in wonder. The stars begin to spin, and trace circular streaks across the firmament – they become the rings of a tree, or the grooves of a vinyl record.

We are absolutely thrilled to be working with Diane van Horn, Doug Cohn and their top notch crew at Atlantic Records to bring you this exciting promotion. To ensure that we get programmers all whipped up into a frenzy about Moments in Grace, we’re offering the “Capture the Moments In Grace” contest. Any programmer that adds the Moments In Grace “Stratus” video during the month of September or October will be entered in a drawing to win an incredible prize: a brand new SONY Mini-DV camcorder (pictured below) valued at over $1,000! The drawing will take place on October 30th. 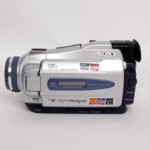 Moments in Grace will be spending the rest of 2004 traversing the United States opening for two of our favorite indie rock outfits, Further Seems Forever and Hot Water Music. The band is stoked to video interviews with each and every one of you as they kick out the rock action from coast to coast. If you would like to interview Moments in Grace on tour or want to secure a video ID for your show, call Andy Gesner at 732-613-1779, or email info@HIPVideoPromo.com. You can also visit the band’s official website to find out more about this engaging and emerging new band.