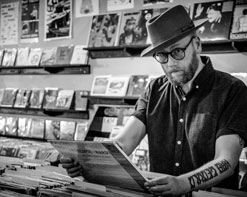 By his ninth solo album, The Heart Watches While the Brain Burns, you’d figure he would have slipped into a comfortable pattern, but Mike Doughty is not that kind of artist. The former frontman of Soul Coughing is obsessively, constantly driven to sound new. The elegant, charming album swerves between lonesome country influences, and trap beats.

The title is pulled from a WTF! podcast, on which Doughty’s old buddy Marc Maron used the phrase, somehow, in reference to chewing nicotine gum, in his struggle to quit smoking. The two go back to the East Village comedy scene of the late ‘90s, so when Doughty asked Maron if he could use the line as an album title, the comic responded, “Use it and throw me a bone.”

The Heart Watches While the Brain Burns was recorded during a transitional phase in Doughty’s life, in which he left New York, his home base since the late ‘80s, for the “fascinating, mysterious town” of Memphis, Tennessee. The low cost of living has given Doughty freedom to make experimental music in bars around the city, while completing the album with Queens, NY hip-hop producer Good Goose over the Internet.

The first single, “I Can’t Believe I Found You in That Town,” was inspired by a failed romantic connection in a grim city in the North of England. In a total of about 36 hours, Doughty became enchanted with a woman, came on too strong over Instagram, and then wrote a song about the botched encounter while stress-eating pastry in a pub, then racing back to his dressing room to work out the song on guitar.

For the new video Doughty taps into his NYC roots one more time to deliver a sweet tale of young love on the Coney Island boardwalk. All of the classic landmarks are there, like the Wonder Wheel and the Wild Mouse, not to mention a fair share of Mike Doughty t-shirts being worn by men, women, and children of all walks of life. What makes the seaside resort so unique is the people and the diverse collection of personalities that come together each summer to this bohemian paradise. Amongst the crowd is a young couple enjoying the sights and sounds of the night, but most importantly they’re enjoying each other’s company. It’s a little slice of unexpected young summer love and from the boardwalk to the beach it is a perfect sayonara to the summer.

As huge Soul Coughing fans, it’s truly thrilling to be a part of the Mike Doughty team. We would love to share all of the goodness that is The Heart Watches While the Brain Burns with you, so please get in touch with us here at HIP Video Promo. You can call (732)-613-1779, email us at info@HIPVideoPromo.com. You can also visit www.MikeDoughty.com for more info on Mike Doughty.