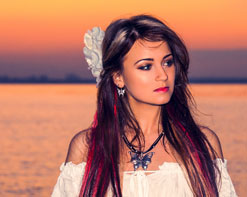 Milana May is no stranger to overcoming obstacles to accomplish her dreams. Born in Siberia, she has literally traveled thousands of miles to pursue her musical career, landing in New York City where she’s translated her classical upbringing into her own current innovative sound that blends all different kinds of EDM music with a mystical raw, lore vibe. Likewise, her lyrics are multilayered, melding the lifestyle concerns of a hip, young, urban New Yorker with the esoteric symbolism of folk mythologies. Her new single “Joy” is the essence of this spirit of collaboration, enlisting the help of a pair of producers, Wølsh & Lucas Stiw, to bring this vision to life.

Like many children in the US a generation before her, when MTV entered post-Soviet Russia she was instantly determined to one day find herself on the channel and as a household name in the pop world. Her upbringing as the daughter of a classical music teacher and a Shaman instilled a unique worldview in her, which helped her when she set off in her late teens, which she describes as “An intense time of adrenalin-filled excitement where I was also walking in the dark with no ground underneath my feet.”

She quickly landed on her feet, studying at the Lee Strasberg Theatre and Film School and linking up with award-winning jazz-funk bassist/ producer Richie Goods, who helped her develop her early sound. During this time she began collaborating with more EDM producers and DJs from across the world, which led her to Brazilian DJs Wølsh & Lucas Stiw. The end result is “Joy,” a beautiful song that heaps a healthy dose of EDM and pop into one brilliant track. The song was recently featured by DJ Times in the WMC in Miami. Today, we’re excited to unleash the visual component!

“Joy” is a gorgeous video that captures the vibrance and energy of New York City. Director Alexey Figurov captures the duality of a city that has everything to offer but also sometimes creates a feeling of being totally alone, even amongst millions of others. As she wanders the streets, deep in thought, she finds solitude and inspiration in the big city. Whether it be an obscure street corner or the shore of the East River in Empire State Park with sweeping views of the Brooklyn Bridge and the downtown skyline, Milana finds herself all across the five boroughs. Despite the intense commotion around her, she remains in her own world and her mind is elsewhere. Only brief flashbacks reveal where her mind is at. Will she find what she’s looking for or will the endless abyss of New York City claim another broken heart for itself? See for yourself!

All of us here at HIP Video Promo are incredibly excited to be working with Milana May to help spread the word on her exceptional music and stunning new video for “Joy.” We are here to help you get whatever you need to include this video in your programming, so please don’t hesitate to get in touch and we’ll make it happen! Please contact Andy Gesner and the HIP Video Promo team at (732)-613-1779 or email us at info@HIPVideoPromo.com . You can also visit http://www.MilanaMay.com/ for more info.