Minus The Bear “The Game Needed Me” 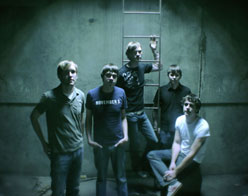 A heartfelt hello to all my video programmer friends! It’s Andy Gesner and the staff from HIP Video Promo, back again with another exciting clip from an underground indie act. After three critically-acclaimed releases, Minus the Bear are well-known for their eccentric song structures, elliptical lyrics, rhythmic experimentation, and dark sense of humor. Their commitment to musicianship and to harmonic exploration marks them as an unusually thoughtful indie rock band, and the rigorousness of their approach has caused critics to occasionally call the Seattle quintet a math rock band. Likewise, song titles like “I’m Totally Not Down With Rob’s Alien” and “Hey! Is That A Ninja Up There?” (Both from last year’s elusive, brilliant They Make Beer Commercials Like This EP) suggest to cursory listeners that the band possesses a casual whimsy and a glib, literary turn.

As always, the story is more complicated than that. The stuttering rhythms and fiercely repetitive elements in Minus the Bear’s music do strike with math-rock precision, but they’re always so well-integrated into the songwriting that they never undercut the band’s pop aspirations. The tricky rhythms and hypnotic instrumental sections do echo the more thoughtful side of progressive rock, but the propulsive rhythm section of bassist Cory Murchy and drummer Erin Tate keeps the songs tight and concise. And despite the humorous titles, Minus the Bear’s subtle, meticulous writing is anything but casual.

With Menos el Oso, their latest full-length on Suicude Squeeze Records, Minus the Bear have penned a startling travelogue. These postcards sent from a turbulent emotional front; tales of barren, windy beaches, dreamlike cities, violence contemplated and accidents in progress, the desert at night, relationships in unsettled stasis. Thick ribbons of synthesizer dance around stuttering organ and oscillating six-string, and parry with warbling guitar noises that sound like satellite signals. Remarkably, despite the instrumental and musical sophistication, Menos el Oso is an unmistakable pop album, filled with sly hooks and boasting a radio-ready sound and approach. Lead single “The Game Needed Me” is a shimmering post-punk masterpiece, and quite possibly the band’s best song yet: built around synthesizer stabs, guitar squeals, and computer-manipulated sound-effects, it rises to a chorus of strange beauty. “What does it cost for this life of excess?” asks Jake Snider in his cool deadpan, spinning out a story of an ambiguous encounter.

It’s bright and approachable, but there’s something glowering about it too. Director FAD captures both sides of “The Game Needed Me” in a clip that manages to be simultaneously detached, diagnostic, and apocalyptic. The director squeezes the quintet into a two-dimensional landscape – a city of tall office towers, wide rooftops, and spacious living rooms. Painted in dark grays and oceanic blue-greens (sort of like Seattle itself!), this metropolis of cardboard cut-out towers feels imperiled, flimsy and unstable. If the pace of the director’s furious cuts seems frantic enough to topple these buildings, that’s nothing compared to the energy with which the band members’ outsized personalities bump against the boundaries of their landscape. It confines them, and yet they manage to transcend it anyway – in one shot, they might be playing in a high chamber in a skyscraper, in the next, Snider’s image is projected on the side of a multi-story building. Lights in the building flash like L.E.D.s, and the music seems to be running through the infrastructure like a current. Finally, and inevitably, the town begins coming apart – the skyline shakes, rooftops are shaved off, towers crumble into powder. As the city disintegrates around them, the band plays on, unaffected.

Seattle is the home to so many of our label clients, and we are thrilled that our new friend David Dickenson from Seattle based Suicide Squeeze Records has hired us to help get the word out about this compelling musical tsunami. Minus The Bear will be on a full US tour this Fall with another HIP favorite, Criteria. We would be happy to set up video interviews or IDs when they come through your area. We will also have plenty of copies of Menos el Oso for on-air giveaways so please get in touch if this band intrigues you. If you need more info call Andy Gesner at 732-613-1779, or email info@HIPVideoPromo.com. You can also visit www.SuicideSqueeze.net or www.MinusTheBear.com to find out more about Minus The Bear.