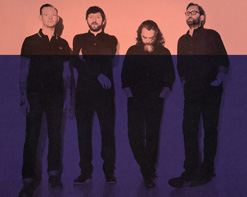 It has been many years since we last worked with Minus The Bear, but based on the signed tour poster that hangs in the HIP offices it’s safe to say they’re an all-time favorite. Naturally we’re beyond thrilled to be a part of the team once again to bring you their new video “Last Kiss.” It comes as the opening track on the band’s recently released sixth studio album VOIDS, a return to their original label home Suicide Squeeze Records.

The visuals of the “Last Kiss” music video are as dizzying as the song’s guitar riffs. Silhouettes of the band spin against a colored background, and we glimpse views of New York City’s various landscapes against close-up performance shots. The line “We can’t see the same color/ Of light” takes on new meaning as the color palette shifts throughout the video. “Last Kiss” was produced and directed by Dan Huiting, who’s also created stunning visuals for the likes of Bon Iver and Sylvan Esso.

Video director Dan Huiting said, “when I first heard Minus the Bear’s “Last Kiss,” I instantly saw the band performing in a new, digital world that would be beautifully surreal and also very geometrically pattern inspired. I think we ended up with a video that represents the band very well, they look and sound great, and we were able to come up with some super rad effects and a piece as a whole that everyone involved is proud of.”

VOIDS is the product of significant change in the band’s world. In addition to the return to Suicide Squeeze, Minus the Bear teamed up with producer Sam Bell for the first time; and keyboardist/vocalist Alex Rose stepped up for more writing and took on some lead vocal duties. Regarding the album title, frontman Jake Snider tells Noisey, “When you have voids in your life, it’s things that are surrounding you and you have to keep going forward through that emptiness until you reach that next phase…. But you have to write about the shit that you did go through and that’s what this record is about.” With VOIDS Minus the Bear have emerged from this period of uncertainty as even stronger than before, while holding true to what has always made them unique: Drowned In Sound calls the album a “testament to a band who have never rested in their creativity, and have managed to rebuild and recreate while holding at their core the things that made them brilliant 15 years ago.”

It’s such a thrill to be working with Minus the Bear and the Suicide Squeeze team once again. Please let us know what we can do to get the “Last Kiss” music video into your programming! Minus the Bear will be on tour this summer with headlining and festival appearances around the world; all upcoming shows can be seen on their website. For more information please contact Andy Gesner and the HIP Video Promo team at (732)-613-1779 or email us at info@HIPVideoPromo.com. You can also visit www.MinusTheBear.com and www.SuicideSqueeze.net for more info on Minus The Bear.

Visit Minus The Bear

For more info on past Minus The Bear music videos, click HERE.