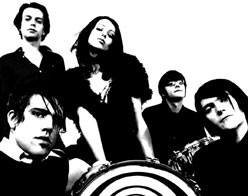 THE MORNING AFTER GIRLS

Hello to all my good friends in the music video community! It’s Andy Gesner and the staff at HIP Video Promo with another terrific rock band from the good folks at Rainbow Quartz Records. Everybody here at HIP had a busy time at last month’s CMJ Music Marathon. But we doubt there are many people in the New York metro area that week that had more hectic days than the members of The Morning After Girls. During four whirlwind CMJ nights, the Australian quintet played seven(!) shows on the city’s most adventurous stages – a late night at Pianos, supporting slots for Brian Jonestown Massacre at the Bowery Ballroom and at Maxwell’s, a gig at the ultra-hip Vicious party at Rothko, a Rainbow Quartz showcase at Arlene Grocery, a KCRQ.Com event at Sin-é, and an international bill at Warsaw in Brooklyn. Since then, the group has rocketed off to London and Toronto, and they’ll be taking their fuzzed-out psychedelia to Tokyo later this month. Such is the life of a buzz band: when you’re hot, everybody wants a share of the excitement.

Considering the interest The Morning After Girls are currently generating, it’s surprising that the group is barely two years old. Formed in Melbourne in 2003, the group has released two EPs already, including one marketed by Universal Music. The Girls’ music has already won them some high-profile like-minded friends: the Black Rebel Motorcycle Club, the Black Keys, and even the legendary Mark Gardener from Ride, who sings on the standout cut “Fall Before Waking”. That song, and eleven others culled from the two sessions, have been repackaged by Rainbow Quartz and made available to North Americans as Prelude: EPs 1 & 2.

“Hi-Skies”, the lead single from Prelude, is a stomping piece of guitar neo-psychedelia: snarling riffs, ringing Rickenbacker, throbbing bass, big backbeat and lots of tambourine. The production is sparklingly modern, but the sound is pure retro: sixties Technicolor garage via Daniel Ash, Love & Rockets, and the spiky side of the Church. Singer Sacha Lucashenko coos his way through the sinuous verse before exploding into raspy screams on the bracing chorus. Martin B. Sleeman squalls out a solo before the final release, and Aimee Nash fills in the space with rattling percussion.

All of The Morning After Girls are great to watch, but the camera loves Nash and Lucashenko. In the stylish, black and white performance clip for “Hi-Skies”, the lens sweeps dramatically around the group – but lingers a bit around Lucashenko’s angular and striking face and Nash’s short skirt and thigh-high boots. Directors Littlemore and Buckmaster are no strangers to Australian rock: they’ve been involved in film and video direction Down Under for years. Here, they present The Morning After Girls as a well-calibrated rock machine, making moves with studied precision. The camera oscillates between the two guitars, changing from one to the other on the beat, and underscoring the band’s twin-axe attack.

Here at HIP Video Promo we are thrilled to be working with Jim McGarry, Tracey Maloney and Ted Heagle at Rainbow Quartz to bring you this engaging performance clip from one of this fall’s biggest buzz bands. We have plenty of copies of Prelude: EP’s 1 & 2 for on-air giveaways and want to make sure all of your Morning After Girls needs are met in a timely fashion. If you need more info, call Andy Gesner at 732-613-1779 or e-mail us at info@HIPVideoPromo.com. You can also visit http://www.TheMorningAfterGirls.com to find out more about The Morning After Girls.