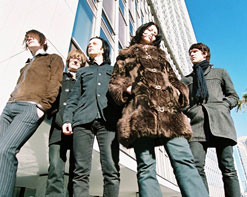 THE MORNING AFTER GIRLS

Hello to all of my esteemed music video programming friends! It’s Andy Gesner and the staff from HIP Video Promo. Whenever we get a new video from our friends at Rainbow Quartz, we know exactly what to expect: first-rate, psychedelic guitar pop. The Morning After Girls are all these things. But because the Melbourne five-piece pledges allegiance to The Jesus & Mary Chain and the Nuggets collections rather than Syd Barrett, their version of hallucinatory rock music is more fuzzed-out and acid-drenched than whimsical and trippy. What’s more, The Morning After Girls are are also impeccably stylish – unlike many neo-psychedelic bands of note, they look every bit as good as they sound. Dressed like the Velvets, playing instruments that could have belonged to the Seeds, and effortlessly spinning out garage rock hooks and beats, this gang of electric guitar traditionalists feels shockingly contemporary.

Announcing their presence with the Prelude EP compilation in 2005, The Morning After Girls have spent the months since their debut release relentlessly spreading the word. The quintet is now a tri-continental phenomenon: not only have they toured their native Australia and Europe, but they’ve sent shockwaves through New York and Austin at the CMJ and SXSW festivals. The Morning After Girls are a fascinating live experience, adapting to and communing with the audience during every show, channeling emotional states, stunning listeners with the intensity of their sound. They’ve been touring with Black Rebel Motorcycle Club, and it’s an excellent match – both bands use elements of the past to elevate the present, and both groups tear into psych-pop songs with uncommon fury.

“Run For Our Lives” is The Morning After Girls at their richest and most hypnotic. The front line – guitarists and singers Martin B. Sleeman and Sacha Lukashenko – weaves interlocking patterns and riffs over a rock-solid groove. The Morning After Girls make the sort of music where the tambourine part really matters, and organist-slash-percussionist-secret weapon Aimee Nash proves up to the task. Her rattling tambourine isn’t exactly a lead instrument, but it is essential color – it gives the song that super-psych sizzle.

Thoroughly fetching in knee-high boots and a black and white dress patterned to echo the skewed-bullseye insignia on the bass drum, Nash dazzles in the “Run For Our Lives” clip. She’s easily one of the best-looking women in indie rock, and she’s a magnet for the camera: even as it slowly circles the band, it lingers on the winsome percussionist. Her’s is the first figure we see as the lens pans in to the band playing in a warehouse, and she dominates the final frame as well. In their black suits and glasses, Sleeman and Lukashenko look sharp, too, but the four men in the band are dressed to appear interchangeable. There’s no mistaking Nash for anybody else.

The Morning After Girls are known for their skewed, semi-psychedelic performance clips, and with “Run For Our Lives”, they’ve perfected the style. No crazy filters or kaleidoscopic lenses for this band; on the contrary, they manage to effect a head trip with little more than a wash of light, camera pacing, and some subtle manipulation of hues. Red globes hang from the ceiling of the warehouse – but that’s the only splash of bright color in the clip. Sunlight pours in through the windows and deliberately overexposes the film, the band appears to be playing in a haze of radiance. The frantic pace of the song creates an unsettling contrast with the slow, majestic arc of the camera. At times, Sleeman and Lukashenko appear to be playing in slo-mo. They aren’t – it’s an optical illusion and mind game, played by a gang of psychic pranksters.

We are thrilled to be working with our friends at Rainbow Quartz again to bring you this terrific new clip from The Morning After Girls. We will have plenty of copies of Prelude: EPs 1 & 2, so please don’t hesitate to get in touch if you’d like to set up on-air giveaways. If you need more info call Andy Gesner at 732-613-1779, or email info@HIPVideoPromo.com. You can also visit http://www.TheMorningAfterGirls.com to find out more about The Morning After Girls.

For info about The Morning After Girl’s previous video, “Hi-Skies” click HERE