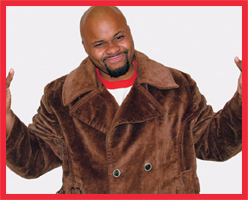 Greetings to all of my esteemed video programmer friends! Coming back at you with another breakthrough video, it’s Andy Gesner and the staff from HIP Video Promo. Every alternative rap fan worth his copy of Dr. Octagon knows Kool Keith’s work. But what about Motion Man, the infamous Ultramagnetic MC’s frequent partner and color commentator? He dazzled us in his guest spots on Sex Style and provided a (just barely) sane counterpoint to Keith’s madness on Black Elvis, and even gone blow for blow with Kool Keith on the Kutmasta Kurt Presents Masters Of Illusion album. But despite the Kutmasta Kurt-produced solo album Clearing The Field, those appearances (which also include an appearance on the re-mix version of “In The End” by Linkin Park on their multi-platinum Re-Animation album) are about all most East Coast rap aficionados have heard from Motion Man. In his native Bay Area, he’s considered an underground legend; outside of San Francisco, he’s respected and admired by all those who know his music, but still his work a solo artist has yet to receive the attention it has always deserved.

With Pablito’s Way, that’s all about to change. We’ve heard the latest record from Motion Man, and we say with some confidence that it’s the must-have alternative rap album of 2006, and one that’s bound to garner acclaim for the abstract emcee from all quarters. His collaboration with DJ Vadim on the song “The Terrorist” is well known in the underground circles, but was just a taste of what we could expect from Motion Man. The guest appearances alone are enough to guarantee Pablito’s Way its left-of-the-dial notoriety: Kool Keith, DJ Q-Bert, Mistah Fab, Too Short, and Gift Of Gab all contribute to the set. Most of the guest stars are Northern California stalwarts, too, and they know exactly what makes Motion Man unique, and how to help him shine. And shine he does – emceeing in his literate, charismatic, and inimitable style on twenty-one new cuts, blessing each with his off-the-wall lyricism and moments of sudden, penetrating insight.

Kutmasta Kurt is back behind the boards, and his production is, as always, a treat. Those who know his beatmaking prowess from Sex Style, his collaborations with Kool Keith on The Diesel Truckers, Dr. Dooom and Dr. Octagon, or his work with the Beastie Boys, Mos Def and Del the Funkee Homo-Sapien won’t be surprised by how nuanced and propulsive these tracks are: a Kutmasta Kurt production always reveals its hidden dimensions slowly and surely upon repeated listens. Because he never hits you over the head with his musical erudition, Kurt is probably the underground producer whose material is most party-ready. “One Time For Your Mind”, the lead single from Pablito’s Way is a prime example: superficially, it’s just a funky, danceable soundscape set up for Motion Man and Blackalicious’s deft Gift Of Gab to blow over. The more you’re exposed to it, though, the more its rhythmic sophistication becomes apparent.

The clip for “One Time For Your Mind” is similarly distinguished by its lack of adornment, and by what director Odin Wadleigh decides to emphasize. The two emcees are the stars of the video, trading verses and cutting in front of each other to deliver their lines to the filmmaker. Wadleigh focuses on the rappers’ lips as they twist to spit outrageous verses, and on Kurt’s hands as he executes an old-fashioned deejay break. There are dancers in a corporate lobby (and a lucky office worker who manages to get caught up in the excitement) and sparkle confetti falling from the ceiling, too; this is a rap video, after all. But for the most part, what’s on display is the artistry of the emcees and their outrageous personalities, and when they step to the camera to rap, they hit their marks with the unquestionable authority of underground veterans.

We’re psyched to be working with our good friend Kutmasta Kurt and everyone at Threshold/Nature Sounds, who have been kind enough to set us up with an abundance of Pablito’s Way for all of your on-air giveaway needs. If you need more info, call Andy Gesner at 732-613-1779 or e-mail us at info@HIPVideoPromo.com. You can also visit www.ThreshRecs.com to find out more about Motion Man.