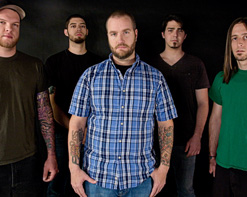 Turn up the volume programming brethren, it’s Andy Gesner and the HIP crew, here with a loud hard rock gang of five rock and rollers that are ready bring down the house! My Amends is a powerful, high energy band from southern Florida, and they’re ready to take over the nation one mosh pit at a time. Don’t just take our word for it, take a listen their brilliantly crafted new single “Slaves” and you’ll be instantly hooked by their precise drum and guitar work, as well as their honest lyrics.

“Slaves” is the leading single from their upcoming album Acceptions, hitting stores August 9th nationwide and online. My Amends have laid the groundwork to becoming a credible music force in their genre and are proving they have only just begun to scratch the surface by building a massive fanbase through countless shows and national tours, sharing stages with acts such as Every Time I Die, The Sleeping, Vanna, Straight Line Stich and Poison The Well. My Amends’ killer sound has also earned them “The South Flocal Sound Check Artist of The Month” slot at 93 Rock (biggest rock station in South Florida). Acceptions is the follow-up to the band’s critically acclaimed EP titled That of A Lion, which was distributed at more than 100 digital and mobile stores worldwide. Beth Feinstein-Bartl fromSouth Florida Sun-Sentinel claimed that the EP is “hard-driving with an intensely-emotional sound and brutally honest lyrics,” while IndieRockMagazine.com raves “My Amends is fierce Rock & Roll…A style with no labels or limits.” The group has also placed at the Top 10 Reverbnation.com Rock bands in South Florida for six months straight, earning them sponsorships from Lashbrook guitars, Silverfox drumsticks and Clayton guitar picks. My Amends’ music has been placed for major brands ESPN and WWE action figures web campaigns, and earned spots in five different categories on the Grammy Entry-Ballot.

My Amends doesn’t hide behind an army of production tracks, nor do they yearn to dabble in studio magic. This band is guts out heavy rock in the manner of Thrice, Silverstein and Senses Fail. “Slaves” is a song that reaches for glory and begs for crowd surfing all at the same time. The guitars and drums are in perfect tightly knit composition, while the vocals are earnest and roar into the front of the mix. The “Slaves” video shows of the band’s intensity as they perform their song amidst a cloud of fog and lights. If you watch closely, you’ll also notice a spirit girl who etches writings onto the floor of the band’s performance area and whispers into the ears of the members as they play on.

We hope you get your devil horns on for this fantastic entry into the genre and join us in exposing this hardworking group to the masses! We will be getting copies of the band’s new album soon and would love to share it with you, so start filling in your requests for contests and giveaways. If you need more info, call Andy Gesner at 732-613-1779 or email us at info@HIPVideoPromo.com.