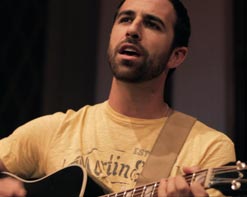 Deemed by Billboard Magazine Discoveries as “production savvy with eloquent lyrics and authoritative imaging,” My Silent Bravery is the brainchild of artist on the rise, Matthew Wade. Having played over three hundred shows in three years, My Silent Bravery is destined to make a major impact on contemporary music fans, and HIP Video Promo is pleased to introduce the latest clip “On My Side.”

To Matthew Wade, My Silent Bravery symbolizes persistence, perseverance, and inner strength to overcome obstacles in the face of adversity. It is this type of determination that helped him overcome a sports injury in his youth that led him to pursue his passion in music. Wade has been releasing new music independently and touring to support it for over five years, and has a dedicated Northeast U.S. fan following to prove it. Endorsed by Gibson, My Silent Bravery shared the stage with national acts including Daughtry, Delta Rae, Howie Day, Kris Allen, John Waite, and Candlebox amongst many more.

Can’t Quit Deluxe Edition was the third LP from My Silent Bravery, and features a track with Grammy nominated recording artist, Matisyahu. “To Give” (featuring Matisyahu), was nominated at the Independent Music Awards in 2013 for Best Social Action Song. The Can’t Quit release came on the heels of Wade’s first two albums Uncharted Territory and Are You Prepared, which gained My Silent Bravery successful placements on the CW’s One Tree Hill, CBS’ People Choice Awards, NBC’s Last Call with Carson Daly, MTV’s Real World and True Life, and many others. Diamond from Coal is the new and fourth LP from My Silent Bravery and was produced by Anthony Resta.

Mike Mangini and Peter Zizzo recently remixed the new single “On My Side” from My Silent Bravery’s latest album Diamond from Coal, and the song has already received the runner up placement for the songwriting competition, Song of the Year. The accompanying video is a personal thank you from Matthew to all of his fans, friends, and family who have supported him over the years. Throughout the clip, viewers get a behind-the-scenes invitation from Matthew, who is in the limelight for the entirety of the video. It’s a breath of fresh air that in an often cluttered “me me me” music industry, an artist has the presence of mind and awareness to appreciate the fans that have helped him become who he is.

Rich, empowering lyrics that dance throughout the scenes of “On My Side” serve as the soundtrack to Matthew Wade’s story as an artist, and show the world what My Silent Bravery is truly all about. For more information on this exciting new artist, please contact Andy Gesner and the HIP Video Promo staff at (732)-613-1779 or email us at info@HIPVideoPromo.com . You can also visit www.MySilentBravery.com/ for more info.