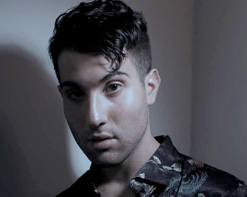 Relationships can be difficult. The ebb and flow of two people intertwining their lives can make for the highest of highs, but what goes up must come down, and a fallout of love can bring people to the lowest of lows. These situations become more complicated when there is a third love in the mix…alcohol. In his heartbreaking new single, “Crazy”, New Jersey’s own Myles Marcus touches upon the difficulties of being with someone who struggles with addiction and the harsh realities of growing up in a world torn asunder.

Myles Marcus has been playing music since he was a kid. At 13 he began releasing covers on the internet and at 14 he released his first original single, “Jump.” It was at this point that he began collaborating with Roy “Royalty” Hamilton. Hamilton is a world-renowned producer, musician, and former Director of A&R at Capitol Records. He has worked with the likes of Britney Spears, Micheal Jackson, NSYNC and Cheetah Girls, just to name a few.

After working with Roy throughout his teens, Myles went on to attend Berklee College of Music in Boston, Massachusetts from 2011 to 2015. He describes his experience at college as “four years of songwriting boot-camp.” After college, Mr. Hamilton signed Myles to an artist development deal up in Toronto, Canada. His move to Toronto was that of a true starving artist; Living on a couch, no friends, and left with nothing but his songs and a dream. It was this time of struggle that brewed an undying hunger for success in the industry that can be considerably unforgiving.

Rising like a phoenix, Myles’ musical renaissance begins here. His new single “Crazy” – which was produced by Toronto-based Dusty Chesterfield and cowritten with Roy Hamilton III, Dusty Chesterfield and Danica Bucci – is a testament to his experience and newfound transparency in his art. It is an ever-relatable anthem for those in love with someone who suffers from addiction. In the wonderfully crafted, fully realized music video for “Crazy”, Myles’ female love interest is unable to put the bottle down for him. Her love simply cannot trump her vice and the emotional turmoil that ensues is agonizing for both young hearts. He feels inadequate, she feels powerless. The thought that this may never change represents the hardships of adulthood. There are some things in life that are out of our control. Some things just are, and we must live with them for the rest of our lives; A hard lesson learned through this artist’s experiences as a young adult in a rough industry. This heart-fluttering pop smash is only the beginning of Myles Marcus’ conquest of mainstream music and he’s proven through unflappable tenacity that he’s impossible not to root for.

It’s a profound privilege to get to work with Myles Marcus to bring you this compelling new clip. We always embrace the opportunity to work with our fellow Garden State musical kindred spirits and in our book, Myles has the hooks, the looks and songwriting savvy to break through big in 2018. Please get in touch with us here at HIP Video Promo to let us know what we can do on our end to secure the “Crazy” video the exposure and attention it deserves. Please contact Andy Gesner and the HIP Video Promo team at (732)-613-1779, email us at info@HIPVideoPromo.com or visit www.MylesMarcus.com for more info on Myles Marcus.