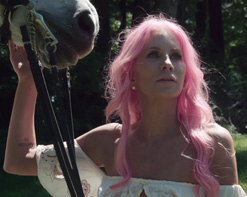 Amaurotic: there’s an unusual word. It describes a sudden and unexplained occlusion of sight – an interruption of the usual transmissions of daily life. It’s a scientific term, but also one that carries with it ominous, mystical, otherworldy overtones. Amaurotic is also the name of Natalie Page Bentley’s latest EP project, and those who know her enchanting sound will immediately understand why it fits. Her emotional world is one that is constantly in flux, washed by the tides of her unconscious, and her songs finds the intersections between technical precision and sensuality. Bentley’s gossamer art-pop is a river with a cool, placid surface and dangerous, swirling undercurrents; it’s deep water for sure, but it’s too inviting not to dive in.

Bentley and director Edan Cohen have fashioned provocative music videos for three of the tracks from Amaurotic, and they do play as distinct artistic entities. Each has its own hypnotic personality. But really, they’re all part of one continuous film – a little more than ten minutes of gripping, interrelated images with brief spoken-word interludes in between the songs – and that’s the way we’re presenting “Ride Home,” “Lost Girl” and “Holy Water” to you. Taken separately, each video is a riddle that demands further investigation; viewed in sequence, the puzzle pieces snap together, and a magical through-story becomes manifest.

The Philadelphia singer-songwriter is no newcomer to the art of intriguing audiences. As the prime mover behind the award-winning Trillium Vein, she’s been seen on MTV.com, Fuse.tv, and many other international outlets. She’s an experienced independent filmmaker, too: both as Trillium Vein and under her own name, Bentley has created on-camera fantasias that have captivated crowds at screenings across the country. The Amaurotic video series is just the latest expression of a restless vision that continues to evolve in startling directions.

Bentley is the focus of these beautifully-made videos, which were filmed in the woods of Chester County, Pennsylvania, but she’s not the only star in this show.  Her romantic interest throughout the series is played by the muscular Abe “Hurricane” Wagner, a contender for the mixed martial arts heavyweight championship. (She also shares screen time with a gorgeous white horse.) The chemistry between Bentley and Wagner is apparent from their very first frame together — and before long, the action between the two gets decidedly steamy. But there’s more to the relationship than sexual attraction. Supernatural elements filter into the clips, too, as do suggestions of physical surrender and mortality. It all leads to an unsettling conclusion that’ll make you jump back to the beginning of the series to watch the narrative unfold again.

We’re thrilled to be partnering with Natalie Page Bentley once again on these new releases! Please let us know what we can do to get it in to your beloved programming. You can contact Andy Gesner and the HIP Video Promo crew at (732)-613-1779 or email us at info@HIPVideoPromo.com or visit www.NataliePaigeBentley.com for more info on Natalie Paige Bentley.