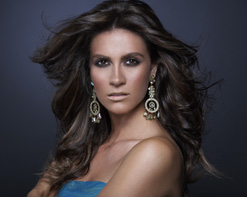 Greetings ladies and gentlemen of our music video community! It’s Andy Gesner and the staff from HIP Video Promo proud to bring you our 400th video, Nazanin’s “Someday”. Over the years, we think we’ve sent you some rousing stuff – from Ministry to Ted Leo to Dr. Octagon, HIP clients haven’t been afraid to sing confrontational material and speak truth to power. Yet we don’t think we’ve ever seen anything quite as inspiring or courageous as “Someday” by Nazanin. The newest addition to the Bodog Music roster is best knows as Miss World/Canada 2003: one of the 50 Most Beautiful People in the World, according to the agency that hosts the pageant (not to mention most everybody who sees her). But although she lives north of our border, Nazanin Afshin-Jam is an Iranian expatriate whose family fled the country after the fundamentalist Islamic takeover in 1979, and who has dedicated her musical career to humanitarian efforts and lending a voice to oppressed Persians. There’s no quibbling about it, either – Nazanin’s songs are explicit, direct, and unforgettable.

And she’s gotten results, too. Last year, she led a campaign to overturn a death sentence handed down by an Iranian judge to a young woman – also named Nazanin – accused of killing her rapist. Nazanin Afshin-Jam collected close to half a million signatures protesting the hanging, and little more than a month ago, the sentence was overturned. A thirty-minute documentary entitled “The Tale Of Two Nazanins” – directed in part by Afshin-Jam – chronicles the struggle and eventual triumph of the human rights campaign.

The pop singer has dedicated “Someday” to the woman she helped save. Sung entirely in English (Nazanin, who was educated in Paris and who holds a rank as a Royal Canadian Air Cadet, performs her songs in four languages), the song spells out her complaint against the “regressive revolution” and the ruling theocracy, and promises a future in which human rights will be honored. Speaking in the National Review, Nazanin explains her objections: “we could not tolerate the brutality of the regime, and political, social and economic instability, not to mention a judicial system based on Sharia law that spells out that a woman’s life is worth half that of a man’s.” .

The clip for “Someday” is as unflinching as the lyric: footage of late-seventies Iranian unrest is broadcast on picture-frames in an elegant Persian hall. But just as the sentiment of the song can easily be applied to any group of dissidents struggling for equality, liberty, and human rights, the video thematizes the universality of progressive protest. Nazanin shows images of uprisings in Eastern Europe, breaches in the Berlin Wall, citizens standing against the tanks in Tiananmen Square, and a freed Nelson Mandela raising his arms in gratitude. Spectators stand before the moving images, watching the scenes of liberation with hope and anticipation. The message is unmistakable – corrupt regimes invariably fall, and the efforts of inspired individuals can loosen the bonds of tyranny. An implacable Nazanin, dressed with understated glamour, steps out of the frames of the pictures, steps toward the camera, and offers her listeners a way forward.

Here we are once again, with the privilege of working with Bodog Music, the folks who brought you bands like The Vincent Black Shadow and Neurosonic. This record label has a history of championing stellar artists, and Nazanin is another sure hit. We have in our possession a plentiful supply of her debut album Someday for all your on-air giveaway needs, so don’t hesitate to get in touch for your copy! For more information, call Andy Gesner at 732-613-1779 or e-mail us at info@HIPVideoPromo.com.