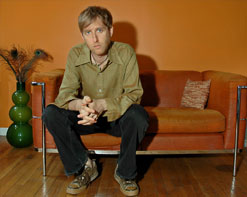 Hey there, programming friends! It’s Andy Gesner and the rest of the HIP Video Promo staff reveling in the fact that there is no shortage in sight of double-dose videos this summer. The most recent pairing comes from singer-songwriter Neil Nathan, whom you may remember from last summer when we championed his rendition of ELO and The Move’s “Do Ya ” (featured on Showtime’s Californication Soundtrack). This time around, Neil Nathan is bringing forth two originals called “California Run” and “When The Rain Falls.”

“California Run” is the lead video of the two – and rightfully so. In the midst of summer, there’s nothing quite like a tune that can carry you through those warm afternoons as you drive around with the top of your car down and your aviator sunglasses on. Directors Ric Serena and Vaj Potenza realized this and based the vision of this video on that exact sentiment. The clip is vibrantly colored with the sun shining down as Neil Nathan saunters around the beach and hitchhikes along highways, searching for a girl he continues to pine for. With Neil Nathan’s dreamgirl driving around in a ’69 electric blue Pontiac Firebird convertible, singing along to his lyrics, he never loses hope in finding her and even receives the support of famed actress Rosario Dawson (whose film Descent featured a few of Neil’s songs), who is just one of the strangers that offers him a ride. Of course, such a lighthearted song with a bit of a country twang finds Neil Nathan at good spirits at the end of the clip.

The video for “When The Rain Falls” takes a decidedly different turn. In “California Run,” we follow Neil’s travels, but in this particular scenario we follow the driver’s story. Neil’s dialogue exchange with this particular leading lady is a prelude to “California Run” as she wishes him good luck right before dropping him off on a desert highway and pulling away (right where he starts “California Run”). It’s an interlock of stories where Neil Nathan ends up happy, but the same can’t be said for his traveling cohort. “When The Rain Falls” hones in on her emotional and heartbreaking journey of frustration and letting go. Her reaction to her significant other’s photo is not in any way the same as Neil Nathan’s in the previous video. She puts on a convincing performance while Neil sings achingly, “You’re a refugee of yourself, you’ll see.” “The ‘California Run’ and ‘When The Rain Falls’ videos are two sides of the same coin, that wondrous and sometimes very painful thing we call love,” says Nathan of the videos. ‘California Run’ is about the joy of searching for and finding your fated true love and ‘When The Rain Falls’ is about the heartbreak of losing him or her.”

Though visually connected, “California Run” and “When The Rain Falls” are a taste of Neil Nathan’s songwriting flexibility. This New Yorker has the kind of spirit reminiscent of Tom Petty and is on his way to becoming a household name with his catchy choruses in tow.

You can find both singles on Neil Nathan’s debut album, The Distance Calls, which is set to drop on Aug. 24. Having always been a fan of Detroit rock, Neil Nathan has taken his appreciation for the Motor City a step further by recording his album there and collaborating with the likes of Bobby Harlow and John Krautner of The Go and Dean Fertita of The Dead Weather and Queens of the Stone Age. If those big names weren’t enough to entice you, you should know that the album simply brings out the best in Neil Nathan. “It really showcases the style of songs I like to write; from hard rock to folk to countrified rock to garage to powerpop,” he has said.

Here at HIP, we’ve always been big supporters of Neil Nathan and are totally pumped to be working with him again. If you need more info, call Andy Gesner at 732-613-1779 or e-mail us at info@HIPVideoPromo.com. You can also visit,www.HIPVideoPromo.com, www.NeilNathan.com and www.greenlightgopublicity.com to find out more info about Neil Nathan.

For info about Neil Nathan’s previous video, “Do Ya” click HERE