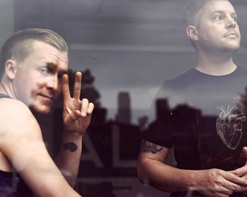 Here at HIP Video Promo we’ve been championing the music scene of Birmingham, AL for several years now. With one of the most organic and creative scenes in the US, the rock, electronic and hip-hop worlds seamlessly co-exist, inspiring and pushing one another. In the middle of this venn diagram of genres is the experimental hip-hop duo Nerves Baddington and their criminally addictive new single “Addict.”

Ryan Howell and John McNaughton are 20-year veterans of the Birmingham music scene, originally performing together in acts like Valerie #4 and Entropy back in the late 90s. After parting ways and getting a ton of musical experience under their belts (Ryan on the hip-hop circuit under the moniker Inkline, John on the punk and indie rock side with bands like Dorian Grey and Greycoat), the pair reconnected to create a project that had all of the angst and energy of punk rock with the brutal honest and social commentary of the best hip hop.

Nerves Baddington combine programming and live instrumentation in a unique and exciting manner on record and, especially onstage, where they take pride in delivering an impassioned performance. They’ve been hitting the Birmingham live circuit hard, with stops at all of the top venues like Iron City, Saturn and Bottletree, as well as the best annual festivals like Secret Stages and High Five Fest. Sharing stages over the years with acts such as Dilated Peoples, Hieroglyphics, The Pharcyde, and Gnarls Barkley has put them in a natural position to own any crowd they step in front of. For the new “Addict” video, they are inserted in front a different type of crowd.

The “Addict” video takes an initially morose setting, a meeting for recovering addicts, and injects it with a bevy of new vices. The video begins with Ryan in front of a room of fellow addicts reciting a familiar line “Hi, my name is Ryan and I’m an addict.” The diverse collection of attendees all take turns getting up alongside Nerves Baddington as they rip through the song, some openly admitting their desires, others trying to play it cool. Despite their best efforts their addictions bubble to the surface and the room makes quick realization of the lyric “The whole world is addicted to one thing or another…” Tomorrow is another day for them to try again, but for today Nerves Baddington is an obsession they can’t pass up!

Nerves Baddington is the culmination of the life experience and multifarious musical influences of Howell and McNaughton, and we couldn’t be more excited to be a part of their team! It would be our greatest joy to see this gritty clip included in your programming, so please don’t hesitate to get in touch to let us know what we can do to make that happen. Please contact Andy Gesner and the HIP Video Promo staff at (732)-613-1779, email su at info@HIPVideoPromo.com . You can also visit http://www.Facebook.com/NervesBaddington/.