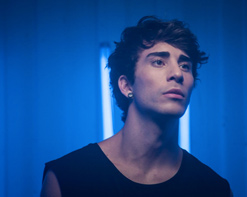 Hot on the heels of his last video “Changing” we’re excited to bring you another brilliant clip by Nick de la Hoyde. “Never Gonna Beg For It” (NGBFI) is the title track and second single from Nick’s hotly anticipated forthcoming EP. NGBFI is a swooning R&B ballad that showcases the singer’s growing maturity and the evolution of his vocal style into one that is deep and intently emotive. The track features a simple yet powerful piano motif, driven by deep bass and a percussive layer that opens and closes as the song progresses; each moment revealing more of the lyrical anguish and moody, deeply textured R&B.

His ever growing presence on the global stage has been supported from radio in his home country of Australia, the USA, Singapore, and more. He’s also been featured in a wide cross-section of tastemaker media, including The Source, PerezHilton, Just Jared, PopCrush, Mechanical Dummy, The Examiner and All Access Magazine, to name a few. Perhaps most impressive is his stellar level of attention on the social media front. With over 160k Instagram devoted followers, Nick’s voice is one that deserves to be heard by fans and critics alike.

The video for “Never Gonna Beg For It” places Nick front and center as he expunges his heart for everyone to see. In between his alluring performance shots soaked in neon lights we bear witness to Nick interacting with a stunning female counterpart. She’s beautiful and she knows it, and is going to try to extract everything she can out of Nick before she accepts his affections. Her body language is one of stoicism, but Nick isn’t about to be tricked. His confidence and devotion is what he’s offering but he won’t allow any games to be played with his emotions.

We’re here to make sure you and your viewers dive headfirst into this fantastic new video. If you’d like to learn more about Nick or get a copy of his new EP, Never Gonna Beg For It, contact Andy Gesner at (732) 613-1779, or e-mail the HIP Video Promo staff at info@HIPVideoPromo.com. You can also visit www.NickDeLaHoyde.com for more info on Nick de la Hoyde.