Nicole Atkins “The Way It Is” 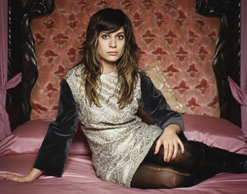 Hey, everybody, it’s Andy Gesner and the crew from HIP Video Promo, here to share the latest clip from a New Jersey singer and songwriter with a world-class voice. “My songs are dark”, explained Nicole Atkins in Rolling Stone, “but you can still do the mashed potato to them. I want to sound like a girl group in a David Lynch movie.” Over the past three years, she’s often succeeded in that ambition, but she’s never hit the bulls-eye quite as resolutely as she has with “The Way It Is”. The latest single from the Neptune City chanteuse (and her talented and empathetic band) could have been pulled from the wee-hours playlist of an adventurous Fifties radio station. Many singers list Patsy Cline as an influence; Atkins is one of the few who merits a genuine comparison with the queen of sophisticated pop balladry.

Hers is a voice that has been turning on listeners across America. Recent tours with the Raveonettes and the Long Blondes have brought Atkins’s music to the attention of thousands of new fans, and a high-profile American Express advertisement has introduced her name and her face to millions more. Neptune City, her debut record, was already hotly-anticipated before Rick Rubin signed on to remix the tracks; now, we can’t think of another singer-songwriter album that’s generating so much pre-release interest.

Lead video “Neptune City” has been a YouTube favorite for months, but after hearing “The Way It Is”, it feels like a prologue. Similarly to “Neptune City”, the latest single is suffused with nostalgia, but this is no simple trip down memory lane. Like Leslie Feist and Amy Winehouse – two singers who Nicole Atkins sometimes resembles – the talented indie frontwoman uses the past as a resource, and a jumping-off point for resolutely modern meditations. It helps that Atkins’s huge, powerful voice bears the stamp of timeless authenticity. On “The Way It Is”, Atkins is a gigantic presence, squeezing every ounce of remorse and longing from the song’s elegant melody. Much like the late Roy Orbison, she leaps octaves effortlessly, and catapults the listener into emotional territory rarely traveled.

The clip for “The Way It Is” displays a similar fascination with the power of past – and the power and impermanence of memory. Atkins herself appears in red pumps and a billowing blue skirt; her outfit would look equally stylish at a Fifties cocktail party and on the streets of Williamsburg today. She sits in a dressing room inside a warehouse, and she’s surrounded by antiques: blown-glass vases with roses in them, a framed still-life, classic furniture, an heirloom mirror. Yet, again, all of these lovely objects could easily have been found in a modern thrift-store. There’s no clear implication that we’re looking at a re-enactment of a scene from history. And yet: the footage of Atkins has been treated to appear as if it has been hauled up from a dusty archive. The edges of each frame fade toward black, and shadows encroach on the singer. White scratch-marks occasionally cris-cross the celluloid. The image jumps about nervously as if it’s been threaded through a projector; at the end of the clip, it slips from the reel. By nodding to the past while preserving its ambiguity, Nicole Atkins makes a powerful statement about nostalgia and loss, and does so with consummate flair.

It’s a great thrill to work once again with Valeri Travagliante and all the fine folks at Columbia Records to bring you another outstanding clip from our fellow Garden Stater Nicole Atkins. She’ll be touring selectively this fall – if you’re interested in an interview or video ID when the tour hits your area, let us know. We also have ample stocks of Neptune City on hand to meet all of your give away needs. If you need more info call Andy Gesner at 732-613-1779, or email info@HIPVideoPromo.com. You can also visit www.ColumbiaRecords.com, or www.NicoleAtkins.com to find out more about Nicole Atkins & The Sea.