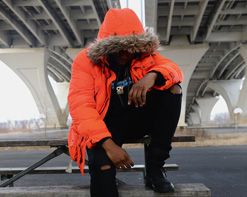 The secret is out, and everybody in hip-hop nation knows: Washington, D.C. has got it going on. If you’re a fan of beats, rhymes, cultural ferment, and musical creativity, the country’s capital has become the place to be. Wale, GoldLink, Shy Glizzy, Chaz French, and other audacious new voices from D.C. have become national figures. To that list, go ahead and add another name: Noochie, an OY Music emcee whose scalding verses and deft wordplay have set the DMV (that’s shorthand for D.C., Maryland, and Northern Virginia) on fire. Recently signed to Atlantic Records and in current collaborations with Grammy Award-winning Producer, Om’Mas Keith, Noochie is about to sear his powerful lyrics into the national consciousness.

If you’re a fan of DMV hip-hop, you may know Noochie best for “Gutta”, a monstrous banger with a trap beat, an irresistible flow, and an uplifting message. That song first became a viral hit in 2016, and eighteen months after its release, it still hasn’t cooled down. It’s no exaggeration to say that after “Gutta”, Noochie had his whole city behind him. “Confidence,” his latest single, builds on the success of his prior singles and mixtapes, and extends their positive themes. Assisted by multiplatinum-selling Atlanta rapper and singer Rich Homie Quan, Noochie pays tribute to independent women and their drive to succeed – women who he admires for being “on that Michelle Obama s**t”. As always, his verses are playful, quick-witted, audacious, and delivered with absolute conviction.

We see some of those women in Alex Acosta’s colorful, empowering clip for “Confidence”: hairdressers and dancers, on the grind, doing what they can to get ahead in a man’s world. These are D.C. girls that Noochie and OY Music are showing us, and they radiate toughness and warmth in equal measure. OY Music has brought Noochie’s verses to life in video before – his clip for “One Day”, a collaboration with legendary Georgia vocalist Jazze Pha, gave viewers a glimpse of the troubled Barry Farm neighborhood on the Eastern bank of the Anacostia River. The video for “Confidence” shows off D.C., too, and takes a wider sweep; we see hardscrabble Lincoln Heights in the far northeast corner of the District, but we’re also brought to the National Mall, and the Stadium Club, one of the homes of Washington hip-hop. For Noochie, who shot part of the “Gutta” video at U Street landmark Ben’s Chili Bowl, it’s all an expression of regional pride. Currently he loves his city – and his city loves him right back.

Here at HIP Video Promo we embrace success stories! We’re profoundly honored to have the opportunity to work with Noochie once again and thrilled to see him making such massive strides in his upward trajectory. Don’t sleep on this video or artist and rest assured we’ll have plenty of Noochie merch for on-air contests and online giveaways! He’ll also be available for interviews, Q & As and meet and greets so don’t be bashful about getting in touch. For more on info on “all things Atlantic Records recording artist Noochie”, contact Andy Gesner and the HIP Video Promo staff at (732)-613-1779 or email us at info@HIPVideoPromo.com. You can also visit www.Facebook.com/NoochieMusic or www.Twitter.com/NoochieMusic for more info on Noochie.