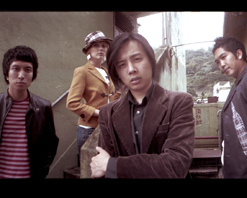 Greetings cherished programmers! It’s Andy Gesner and the staff from HIP Video Promo here with an import that is sure to drop your jaws. Searching for the coolest neighborhood in the world? Don’t bother looking in America or Europe; that’s all bought and sold. Instead, turn your attention across the Pacific Rim to Hong Kong, where centuries of intra-cultural friction has kept the arts scene surprising and vital. The densely-populated North Point of Hong Kong has always been a place of departure for international travelers; today, the area remains an essential point of intersection between the East and West. No surprise, then, that the neighborhood is home to many exciting rock groups, and that great bands like Noughts And Exes have begun to make North Point a virtual destination for the indiepop cognoscenti.

N&E take their roles as cultural ambassadors seriously. The members of the quintet recognize that the Hong Kong pop musical tradition is virtually unknown in the United States – so Act One, Scene Onemakes their love for their city explicit, and palpable for listeners of all backgrounds. Superficially, nothing here sounds foreign: the songs are sung in English, and they’re as sharply-written and sonically familiar as anything from the American underground. Dig a little deeper, and the group’s international influences become apparent. Nordic art-pop, British new wave, bracing and lo-fi U.S. indie, transcontinental experimentation – Noughts And Exes draws on all of this and more. Their music has been likened to that of Sigur Ros and Boards Of Canada, but N&E rocks more forcefully – and their narratives make more immediate sense – than either.

“A Minor To Major”, the lead single from Act One, Scene One, is quintessential Noughts And Exes: intriguing lyrics, rich harmonies, a sophisticated arrangement that twists and bends but remains coherent, and an empathetic performance from singer Joshua Wong. The first verse floats through a mist of guitar effect, the second is laced over rimshots, and the third is pushed forward by an inspired string arrangement. It’s a bracing listen – seductive, bright, and mysterious as it is – and it feels like the opening song at one of the most mind-altering concerts you’ll ever attend.

Wong is a well-known in hip North Point – and not merely for his music. He’s also considered an innovative graphic designer, and the weird and beautiful clip for “A Minor To Major” is clearly an artist’s work. The animation here is deliberately strange: cut-out shapes of the bandmembers’ heads dance, bobblehead-like, on their bodies as they play. It’s a collage made from parts of the musicians, but one made intentionally disproportionate – the singing heads are bigger that the torsos, and the limbs swing as if animated by an invisible puppeteer. The band performs in a house on a city street at night; soon, fissures appear in the roof and walls, and soon the structure has fallen away, and Noughts And Exes find themselves in a two-dimensional paper forest. In perfect formation, the five musicians run up and down impossibly steep hills (inspired, perhaps, by the world-famous topography of Southeastern China). Even as the sky opens, they’re unperturbed. They run onward to a house on the crest of a mountain – which, as it turns out, is the same one they began in. It’s all odd and wonderfully destabilizing, and a perfect companion to Noughts And Exes’s challenging, intoxicating music.

It is a distinct pleasure to be working with the folks at Omerta Group Records on the “A Minor To Major” video campaign. They have been kind enough to hook us up with a supply of the record Act One, Scene One, so don’t hesitate to get in touch with all your on-air giveaway needs. If you need more info, call Andy Gesner at 732-613-1779 or e-mail us atinfo@HIPVideoPromo.com .