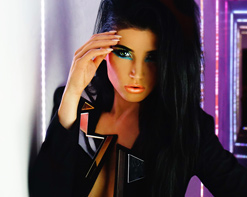 Upon her arrival in Los Angeles, Novel has inserted herself into the national conversation with her wildly satisfying blend of pop and dance music. Today, we’re excited to introduce her to programmers and viewers alike with her bombastic new video for “Give Me Twenty!”

This Paradise Hill, Saskatchewan (pop. 515) native quickly outgrew not just her hometown, but her home province and country. Now a dual citizen of Canada and the USA she started very young on this path. She began dancing at 3, was competing at 5, and culminated with her graduation from the Royal Conservatory of Ballet in 2009. Her love of dance and movement of the human body is a central element to her songwriting approach to this day.

It didn’t take long for Novel to turn her focus to music. She began writing and performing original songs all over Canada. At age 12, Novel made her first live television performance, which led her to being a guest performer for top Canadian country artists. She also had the privilege to sing the Canadian and American National Anthems for NHL hockey teams with crowds of 18,000 people. “I get more nervous if I notice there isn’t a crowd” Novel explains as she laughs, “the bigger the crowd the better I perform.”

“Give Me Twenty” is the ultimate workout that will get the blood flowing to every appendage of the body. This propulsive clip takes place at a sleepy retirement home featuring a very special guest fitness instructor. You guessed it: It’s Novel! She announces her presence with authority and won’t accept anything other then full participation. Her energy and fearless sensuality is infectious, like a living, breathing fountain of youth. One by one the residents transform into younger, fitter versions of themselves and join Novel on the dance floor! This deviant, sassy video is over the top in every way, and makes no apologies for being so fiendishly good!

All of us here at HIP Video Promo are very excited to bring you this radiant and magnetic new artist! We are here to hook you up with whatever you may need to get this video into your programming, so please don’t hestitate to get in touch. You can contact Andy Gesner and the HIP Video Promo crew at (732)-613-1779 or email us at info@HIPVideoPromo.com.