Novillero “The Art Of Carrying On” 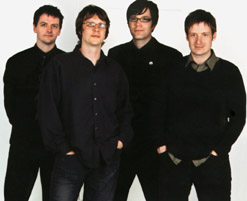 Warm greetings to all my fellow music video fanatics! It’s Andy Gesner and the staff from HIP Video Promo back with another fantastic video from our friends in Canada. It’s no secret that there’s a pop explosion happening in our neighbor to the north – and Mint Records has been an engine driving the Canadian combustion. In the wake of the New Pornographers’ astonishing stateside success, American eyes have been cast over the border to places like Manitoba and British Columbia. Winnipeg, in particular, has always been an artists’ haven, and it’s been served well by legendary indie entities. Local quartet Novillero have a found a terrific new home with Mint; and they’re now ready to stun audiences on both sides of the continental divide.

Aim Right For The Holes In Their Lives, the Novillero long-player, is a collection of sharply-written songs: each one finely crafted, articulately penned, and enthusiastically performed. Some recall the best of the pub-rock and new wave tradition, echoing XTC, Sloan, and Joe Jackson’s most adventurous work, while other tracks lean toward Krautrock and Euro/analog synth-experimental pop. Principal singer Rob Slaughter is also the pianist and synth player, and he’s got a taste for big, expressive arrangements – Wurlitzers banging, drums slamming, choppy guitars and horns blazing away. Critics have gushed about the set, praising its melodic inventiveness and its gorgeous sound quality. “Virtually every song sounds like a forgotten hit from 1975”, crows Jason Ankeny of the All Music Guide in a four-and-a-half star review, “extolling virtues like buoyancy and grandeur as though they never went out of style.”

It’s all magnificently discharged, too. The four members of Novillero are all indie band vets, and their instrumental skill is apparent on every track. Unlike some of their quieter north-of-the-border indiepop peers, they aren’t afraid to stretch out and show off their chops: “The Art Of Carrying On”, the insanely-catchy single from Aim Right For The Holes In Their Lives, features a riotous outro crammed to the breaking-point with horns, beats and shouts. Shy they aren’t, and their exuberance has become legendary. Consequently, they’ve become one of the most exciting live pop bands on the international touring circuit, crashing into the States and the UK, and even popping down to Los Angeles to play themselves in an episode of Monk.

Caelum Vatnsdal is well-known for a book he wrote chronicling the Canadian slasher-flick tradition. But he’s also won applause for his video direction, too – with partner Simon Hughes, he shot the much-loved clip for the Weakerthans’s “Song For The Elks’ Lodge Last Call”. That music was northernly, wintry, chilly; and Vatnsdal and Hughes have more snow ready for Novillero. Winnipeg is one of the coldest major cities in the world (nicknamed Winterpeg by residents) and the clip for “The Art Of Carrying On” captures both the frosty surroundings and the heat the group can generate. The bandmembers are shown driving European cars on icy streets, and playing instruments while they steer, just like the Attractions in the video for “New Amsterdam”. But the Novillero musicians aren’t all in the same vehicle. We see tire treads in the snow as the camera hovers over a busy intersection; then, the inevitable happens, and the cars collide. A ball of fire raises to the heavens – and the next thing we’re shown is the interior of a city bus. United, the band plays in the back; passengers dance, pretty girls blow horns, and a red-hot party rolls through the frozen town.

We are thrilled to be working once again with our friends Yvette Ray, Randy Iwata and Kevin Beesley at Mint Records. We’ve been fans of this band for some time and are psyched the be able to be a part of their team. Make sure you catch the band’s appearance on Monk on August 25th on the USA Network! We have plenty of copies of Aim Right For The Holes In Their Lives on hand for all of your on-air giveaway needs. If you need more info, call Andy Gesner at 732-613-1779 or e-mail us at info@HIPVideoPromo.com.