Nurses “And Now The Curse Of Marjorie” 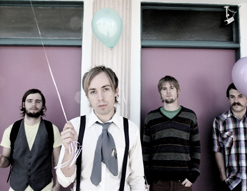 Howdy programming friends, it’s Andy Gesner of HIP Video Promo, here to share a clip from a new group with a distinctive sound and a singular vision. Nurses play indiepop and have operated from bases in Chicago and San Diego, but there are no Beach Boys harmonies or Byrds jangle-guitars in these tracks. These four musicians are Californians and Windy City residents by way of small-town Idaho, and big skies and mountain weirdness hang heavier over their music than does the summer sun. Nurses songs twist, turn, and wander, incorporate sound effects, repeat sections, and end abruptly; odd instrumentation is introduced and just as soon withdrawn; thickets of wiry guitar and piano snare the unwary; tantalizing melodies and intriguing lyrics beckon listeners closer. The uncompromising group has found a home with Sargent House – a noted refuge for talented and idiosyncratic musicians – and good friends in the like-minded Rx Bandits. Nurses are currently touring America with the Bandits, and the two bands of sonic pioneers will continue to crisscross the nation until the end of ’07..

Hangin’ Nothin’ But Our Hands Down, the debut, is one of the most unusual pop albums you’ll hear this year. Here, the Nurses do it all: over-the-top Queen-like productions (“Act Now, You’re King!”), trippy lo-fi folk (“He Gots”, “Marching In Places”), meditative balladry (“Dem Leaves”), twisted power-pop (“Hungry Mouth”), and even hints of cabaret (“Way Up High”) and experimental noise-rock (“Gettin’ Angry”). Plainly, this is a band with little regard for genre restrictions. Singer Aaron Chapman possesses one of the most elastic voices in modern indie: he can howl like a outraged child, cajole like a carnival barker, screech like a backwoods visionary, and coo like the lead in a theatrical production. His intense concert performances have already marked him as a gifted interpreter and a conjurer of strange spirits.

And Now The Curse Of Marjorie”, the Wurlitzer-driven lead single from Hangin’ Nothin’ But Our Hands Down, is Nurses’s most approachable track. But catchy though it is, make no mistake, it’s still enigmatic and haunting. Behn Fannin’s expressive clip for “Marjorie” is no less cryptic. A man with a bag over his face places a strange diorama on a stack of boxes in a back alley, turns an antique key, and switches on the device. A tiny screen opens up to reveal a two-dimensional, cardboard cut-out version of Nurses, performing “Marjorie”. Paper balloons and a grinning sun hang in the background, and the musicians are haloed with light. We’re also shown another view from the back of the diorama; here, we see the backs of the two-dimensional figures and the face of the man in the bag, staring through holes at the band as they play. He runs through the streets with the box in his hands, and the entire stage jiggles as he does – soon, there are bombers in the sky, dropping smiling warheads in the spaces between the bandmembers. During the choruses, the faces of the Nurses appear in a picture-frame, surrounded by blackness and (quite literally) singing their heads off, much like Queen in the famous “Bohemian Rhapsody” clip. Throughout, Fannin makes elaborate use of hand-held camera techniques and choppy, digital filters: it all creates an encroaching feeling of destabilization that perfectly suits the eerie and dramatic “Marjorie”.

We’re excited about the chance to team up with Cathy Pellow and the Sargent House team once again to bring you this clip. If you’d like to catch up with the band for a video interview on their upcoming US tour dates, drop us a line and we’ll hook it up. If you need more info, call Andy Gesner at 732-613-1779 or e-mail us at info@HIPVideoPromo.com . You can also visitwww.SargentHouse.com, or www.NursesMusic.com to find out more about Nurses.