of Montreal “Wraith Pinned To The Mist And Other Games” 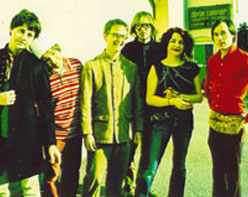 The floodgates of cool indie rock videos have been smashed open! Greetings programming friends, it’s Andy Gesner and the staff from HIP Video Promo, hoping you’re in the midst of a tremendous summer. We’ve never failed to be impressed by an Of Montreal release, and we’re pleased to say that their winning streak continues with The Sunlandic Twins and its brilliant followup video. While so many of their psychedelic pop peers from the late-Nineties have dissipated, lost their spark, or gone underground, Kevin Barnes and Of Montreal just continue to get better. Whether they’re releasing full conceptual works like The Gay Parade or collections of standalone songs like the frequently uproarious “Aldhil’s Arboretum”, Of Montreal combine childlike whimsy with all-too-adult menace to craft music of startling perception and humor.

On 2004’s trippy, knowing, and erotic Satanic Panic in the Attic, Of Montreal really hit their stride. The group still reached back to The Kinks and Syd Barrett for inspiration, but modern indiepop production (and even a dash of world beat!) made this album the group’s most accessible and polished. And while Barnes’s lyrics continued to be mirthful and quirky, he embraced a discordant asthetic more firmly – as song titles like “Disconnect The Dots” and “Eros’ Entropic Tundra” suggest. The Sunlandic Twins extends these developments: Of Montreal continues to refine their craft, and Kevin Barnes writes ever more persuasively of chaos, release, and sweet liberation. The signature Of Montreal sound – warm, glowing, gooey like caramel, rendered in soft primary colors – has never felt sharper. Said Stylus magazine: “The Sunlandic Twins is, both simply and extraordinarily, an addictive, vibrant collection of pop in the most exemplary sense of the term.”

“Wraith Pinned To The Mist And Other Games”, the lead single, bounces along on a bass and hi-hat groove that’s both elastic and funky. This is a party song of sorts – but what kind of a shindig is Of Montreal hosting? “Let’s have bizarre celebrations”, purrs Barnes, “let’s forget who, forget what, forget where”. The narrator seems to be dancing on the cliff of oblivion, tempting non-existence, getting dislocated in time and space. Barnes sings the song in a smooth, seductive tenor, barely straining to cover his intervals, and gliding from note to note with the lysergic assurance of John Lennon.

A group so indebted to trippy, chaotic cartoon imagery required a trippy, chaotic cartoon video. The Kangaroo Alliance – a production duo making a brilliant video debut here – are up to the task. They’ve assembled a dazzling and frequently laugh-out-loud funny video that perfectly captures Of Montreal’s uneasy balance between awed wonder and encroaching danger. The animated clip matches cuteness to out-of-control growth and action, and suggests an acid-drenched toddler’s storybook, or perhaps a fever dream brought on by too much late night Cartoon Network.

The first character we meet – a pulsing, grinning, walking red box – is assembled from dots. We watch it happen: each downbeat summons more red circles as the music conjures the character into existence. But he’s hardly managed to move from his point of origin before he’s blown back into circles by a cartoon villain with a gun. Elsewhere, other characters are undone by the explosiveness of their psychotically happy surroundings. Smiling creatures on a cloud are upended by bold streaks of color. A figure plants an acorn – and is knocked sprawling by the rapid growth of a geometric tree. Up in its branches, its denizens punch each other, unprovoked, and remove their own heads. On an ice floe, a little penguin pushes a friend into the ocean. By subverting expectation and continually surprising the viewer, the Kangaroo Alliance create a destabilized environment that’s perfect in keeping with the venomously cute tone of Kevin Barnes’s songwriting.

The brilliant team at Polyvinyl has an amazing collective in their roster, and Of Montreal is certainly one of their most high profile acts, and deservingly so. The band is starting a national tour in mid-August that will run through September, and is eager to do video interviews and ID’s. We will have plenty of their new LP, The Sunlandic Twins, for on-air giveaways. If you need more info call Andy Gesner at 732-613-1779, or email info@HIPVideoPromo.com”>info@HIPVideoPromo.com. You can also visitwww.PolyvinylRecords.com, or www.OfMontreal.net to find out more about Of Montreal.