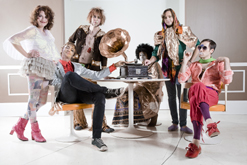 Greetings indie rock lovers! It’s Andy Gesner and the staff from from HIP Video Promo, back with the latest clip from one of the brightest lights in contemporary music, indie or otherwise. After helping to spread the word about five different of Montreal videos, we’d like to believe we know a thing or two about the band. But the truth is, we’re always astonished by the startling choices and about-faces that Kevin Barnes makes. Yes, we’re no different from anybody else in the rapidly-expanding of Montreal audience – we marvel at Barnes’s elasticity, his musicianship, his honestly and lyrical acuity, and his ability to stay fresh and relevant. Like a master storyteller, he keeps us eager for the next chapter, and always delivers something unexpected. After the pleasant guitar-pop of Aldhils Arboretum, who expected the breathtaking synthpop meltdowns on Satanic Panic In The Attic? Who saw the confessional dark-night of Hissing Fauna, Are You The Destroyer? coming after the staggeringly upbeat Sunlandic Twins? So we won’t make any predictions about the soon-to-be-released Skeletal Lamping – the only thing we know for sure is that we’re all going to be surprised.

Judging by the provocatively-titled “Id Engager”, the lead single, Barnes’s winning streak isn’t about to end anytime soon. Bouncing along on the same sort of rubbery groove that made “Gronlandic Edit” so irresistible, “Id Engager” may be the funkiest and most danceable thing that of Montreal has recorded yet. Barnes has already stated in interviews that Skeletal Lamping would further elaborate the Georgie Fruit character introduced on Hissing Fauna: a flamboyant glam-rock alter-ego for the indiepop singer. Those who’ve been lucky enough to catch of Montreal at one of their spectacular recent performances have seen Georgie Fruit in full flower, along with bizarre masks and costumes, elaborate staging, pyrotechnics, wild choreography, and some of the most dazzling showmanship available anywhere and on any stage. No indie band is – or has ever been – any more generous.

Many of the best and most characteristic of Montreal videos have been animated cartoons; who can forget the whimsically savage clip that accompanied “Wraith Pinned To The Mist And Other Games”? For the “Id Engager” clip, Barnes has turned to celebrated London animation house SSSR – and they’ve come up with a video that’s strange and colorful enough to suit the freewheeling sound. We start at the drawing desk, where actual pairs of human hands sketch designs on a piece of paper folded into three. But once the page is unfolded and laid flat, the three sketches combine to create one image: a mustachioed man’s head atop a woman’s body. And because the beat is irresistible, the strange ambisexual creature begins to dance. As he (she?) does, his body morphs into different bizarre forms: a space-alien with an ascot and cowboy boots, a lion with two saw-blades for legs, a unicycle-riding monster with an umbrella-head, just to name a few. The triptych design is kept throughout much of the clip – each being is made up of a head, torso, and legs that don’t exactly match, but which somehow add up to a weird and watchable entity. The SSSR directors play with the folds of the paper canvas, using the creases as the boundaries for their images. In one striking animated sequence, Kevin Barnes’s animated head rests upon a clock-body that starts just below the fold; further down the page, his “legs” are replaced by a tangled network of roads.

of Montreal is back, and we are as stoked as ever to be working on their behalf with Seth Hubbard, Matt Lunsford and the Polyvinyl Records team. They have been kind enough to endow us with a supply of the new of Montreal CD Skeletal Lamping, so please get in touch for your copy today! Also, the band is currently on tour through the middle of December, so let us know if you want to set up a video interview or video IDs when of Montreal comes through your town. If you need more info, call Andy Gesner at 732-613-1779 or e-mail us at info@HIPVideoPromo.com . You can also visit www.PolyvinylRecords.com orwww.ofMontreal.net to find out more about of Montreal.

For info about of Montreal’s “Gronlandic Edit” video, click HERE

For info about of Montreal’s “Suffer For Fashion” video, click HERE