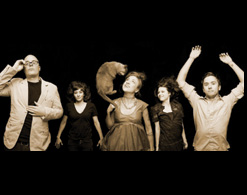 Warmest regards to all my music video programming pals! It’s Andy Gesner and the staff from HIP Video Promo, here with a winning clip from an indie band on the verge of establishing a national profile. Should you happen to recognize any of the faces in today’s video, we promise we won’t tell anybody. The irreverent members of Office have interspersed (decidedly g-rated) footage from classic Eighties adult cinema into their clip for “Oh My”, and done so in a way that it strongly suggests that they’re in the blue movie, too. Well-known porn stars Peter North, Tom Byron, Melanie Moore, and Randy West “appear” in the video – in fact, the conceit of the “Oh My” spot is that the muscular Mr. West is watching Office perform on the wide screens of an old-style film-editing suite. (The clip even comes with a phony “copyright 1984” tag at its conclusion!

Not many bands truly merit comparison to Eighties underground pop legends like Let’s Active, Game Theory, Wygals, the B-52’s, and the dB’s. But Chicago’s Office has the attitude, the spark, the chord vocabulary, the gender balance, and, above all else, the tunes. Frontman and songwriter Scott Masson is a master of melody and a sure-handed craftsman of pop hooks – but as skillful as he is, he’s willing to go wild on the microphone to make sure his listeners are receiving his songs with the proper spirit. The Windy City has always supported its independent power pop bands, and Office’s self-released albums and EPs built the band a devoted hometown following.

But talent knows no geographical confines, and fans of strong songwriting will hunt down pop gems no matter where they’re buried. “Wound Up”, a track from an indie Office album, was named an iTunes single of the week, and the band spent the better part of 2006 in the music website’s Top 100. Appearances at Lollapalooza and SXSW followed – and then James Iha’s Scratchie Records snapped up the quintet, set them on tour with the like-minded Earlimart, and will soon release A Night At The Ritz to a national audience. Ritz contains “Wound Up” and several other songs that long-time fans of the band will recognize, including the maddeningly-catchy “Oh My”.

Office may cheekily retrofit old porn-movie footage in the “Oh My” clip, but they do so secure in the knowledge that they’re sexy customers themselves. Synth player Jessica Gonyea, drummer Erica Corneil and bass player Alissa Noonan are telegenic and winsome (particularly Gonyea, whose pouty stance is strongly reminiscent of Patti Donohue of the Waitresses), and Masson and guitarist Tom Smith have their own geeky charm. Certainly the band looks great in action – they’re a swirl of energy and a splash of color, and they fill the blank white stage-set with a vibrant, candy-coated presence.

The integration of the shots of the members of Office and the adult-movie footage is cleverly-done: the camera jumps from one to the other, but it’s been so well-integrated that it may take you a pass or two to distinguish between the real and the faux. Office has faded, washed, and grained-out the shots they inhabit, and given it all the feel of archival Eighties video. They’re also handy with some ancient “cheese” effects – parting split-screens, pages turning as the scenes shift, freeze-frames and blocky, pixilated fades to black. Subtitles flash under the faces of the porn stars and advance the illusion (they’re pretty funny, too). Consequently, it really does look like Masson is winning the affections of Melanie Moore, and swiping her away from a bare-chested and indifferent Randy West, left to stew in his control room as he watches Office perform.

Many thanks are due to Kevin Kertes and the entire New Line and Scratchie Records teams for bringing us on board to be a part of the Office promotional team. We’re stocked with copies of A Night At The Ritz, and the band will be on tour this fall, so drop us a line right away if you’d like to catch up for a video interview, or get your hands on some CDs for on air giveaways! If you need more info, call Andy Gesner at 732-613-1779 or e-mail us at info@HIPVideoPromo.com . You can also visitwww.NewLineRecords.com to find out more about Office.