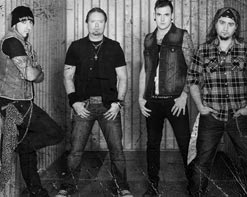 “Put out an album and tour your ass off!” This is the formula for success that ONE believes in. It is a formula that allows the band to connect with people in a way only a touring band can. The want for fan connection is why ONE has played roughly 500 shows over several tours since 2009. The band has taken that electricity and ferocity and channeled it into the new video, “Worlds Collide,” the title track to their newest release on Pavement Entertainment, Inc.

Worlds Collide was a little nerve racking to release due to the fact that is was so diverse. Of course an artist wants to believe their most recent is always the best, fans will always be honest with the work. And it is an honest collection of real emotion on this CD. “From the title track which shows our deeper more aggressive side to a tune like “Never Live for Yesterday” which bleeds more emotion…it is an album with something for almost everyone” says singer Danny Rossi.

Sticking to the formula that has made the band successful to date. ONE hit the road supporting label mates Tantric. An experience not soon to be forgotten. It gave the guys a chance to experience a National tour for more than a couple of days. “Everyone in the Tantric crew were great. It didn’t take too long for us to enjoy going to work every night,” Adds Rossi.

When the time came to create the visual, the band knew that the most logical choice would be to capture the attack and power that they bring to the stage every night. The setting for the video is a menacing warehouse and industrial setting with a healthy amount of smoke and piercing spotlights coming from all angles. Of course, ONE knows that they’re not the only thing viewers want to see, so they have added in a nice bit of eye candy in the form of sexy ladies in tight leather dresses, who seductively dance around the band, doing their best to distract them. All of their efforts are in vein, however, as the band is honed in on the rock, and even a bevy of beauties can’t take their eyes off of the prize.

We’re very pumped to be working with such a brutally epic band like ONE and are here to do anything we can to get this video into your programming. Please contact Andy Gesner and the HIP Video Promo crew to find out more about ONE and their newest release, Worlds Collide, at (732)-613-1779 or email us at info@HIPVideoPromo.com for more info on ONE.