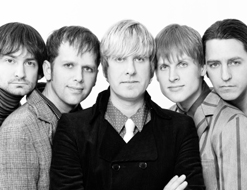 Hello friends! It’s Andy Gesner and the staff at HIP Video Promo, and we’re thrilled to be able to send you the latest clip from our good friends at Rainbow Quartz Records. By now, we all know what the Rainbow Quartz insignia on an album means: top-drawer power pop with baroque flourishes, sterling musicianship, sharp songwriting, and melodies and arrangements inspired by classic recordings. And no band on the label’s roster epitomizes those virtues any better than The Orchid Highway. The Vancouver quintet fuses the excitement and psychedelic swirl of late-Sixties guitar rock with the contemporary. So stellar are the group’s songs that Amplifier Magazine was recently moved to boast that “The Orchid Highway sounds not unlike what the Beatles may have sounded like had they recorded Revolver in 2008.”

High praise, indeed, and they’re not alone in bestowing it. The Orchid Highway’s sonic resemblance to the Fab Four has been noted – and praised – by critics on both sides of the Atlantic. But there’s far more to the band than British Invasion revival: they draw from American forerunners (The Byrds, The Airplane) and modern-day melodic pop pioneers (The New Pornographers, Sloan) as well. “Sofa Surfer Girl”, the group’s latest single and the lead track on The Orchid Highway, folds a cheeky reference to The Beach Boys into a chorus worthy ofPet Sounds. It’s a tale of a woman who’s too restless to settle down – but whose attractiveness always guarantees her a place to crash. She’s been immortalized here in a grandiose, shoutable, wildly-ambitious piece of guitar pop: a winning amalgam of overdriven guitar riffs, lyrical electric piano, rock-solid drums, and heavenly vocal harmonies. (And for true revivalists, there’s even some Indian instrumentation!) Singers Rory and Jamie Macdonald have the hallucinatory imagery down pat, too – “I had a dream the stars were holes we made with tacks/ in giant cardboard boxes, laying on our backs”, they sing, an unmistakable acid sizzle in their voices.

The clip for “Sofa Surfer Girl” winks at classic rock. There are elements reminiscent of Sixties newsreels, yet they remain grounded in the present. The members of The Orchid Highway sit side-by-side at a long table; white light shines in their faces, and glints off of the many microphone speakers in front of the musicians. They take turns singing the words to “Sofa Surfer Girl” into the mikes before them – playing it straight, but it’s plain that they’re onto something. Director Robert Riendeau lends an authentic feel to the footage, flipping it into grayscale, distressing it slightly, and adding colorful bursts of static.

We’re very excited to be working directly with The Orchid Highway to bring you this feel good new clip! If you need more info, call Andy Gesner at 732-613-1779 or e-mail us at info@HIPVideoPromo.com. You can also visit www.OrchidHighway.com to find out more about The Orchid Highway.

For info about The Orchid Highway’s previous video, “Next World” click HERE