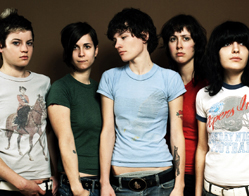 Hello fellow music video lovers! It’s Andy Gesner and the staff from HIP Video Promo bringing you more of the best of Canadian music! They’ve got a great name, a great look, a great sound – and now they’ve got two intriguing clips in their rapidly-growing videography. They’re The Organ, and they’re back with a promo spot for “Memorize The City” that matches the song’s dark, hypnotic mystery. Grab That Gun, the band’s debut, is sonically coherent, shimmering with musical color, ambiguous, and seductive. Frontwoman Katie Sketch spins stories of broken relationships, missed connections, cold hearts, and lust, interpersonal violence, and deception. She’s a chronicler of the modern urban experience, and she brings her stories to life with a voice that sounds and feels timeless.

“Memorize The City” (the city, for those who like things literal, is most likely their home town of Vancouver) is the last track on Grab That Gun, and possibly its most intense. Sketch’s poetry here is sharpened until every line shines and cuts like a scalpel. What begins with a frank examination of isolation and despair becomes a travelogue of town streets and colored lights. The writer is even confident enough to make an explicit reference to the Greek myth of Acrisius, and tether it to a tale of midnight theft, jealousy, and desire. “Sometimes I close my eyes and you’re not very pretty”, she admits, before conceding, in her most self-reflexive voice, “sometimes, I can’t believe I’ve had these thoughts before”.

Video director Jeff Scheven is a musician himself: he plays drums for Canadian rockers Controller. Controller, a group that has toured with the Organ. His work for Death From Above 1979 established him as a filmmaker to watch, and his interpretation of “Memorize The City” ought to make his services in demand. Those hours on the road with Katie Sketch and her band have apparently brought him a strong understanding of what makes the B.C. quintet unique. His clip pulses with empathy and mystery, and captures the feeling of being young, dislocated, intrigued, and dazzled by the city lights.

Scheven’s paintbox is the hot neon of the city strip, and colored electric light, against black night skies, floods his frames. The “Memorize The City” clip begins with an image of flashing red loops – bar lights or street illumination beckoning city pedestrians. As Sketch sings about phosphorescence reflected in her lover’s tears, Scheven superimposes a shot of the skyline over a blinking eye. From there, his camera swings through a cage of light: office buildings, strips of colored fluorescent illumination, brakelights, dusk. The members of the Organ are shown in silhouette, framed by the colored radiance behind them: they’re places where the light is eclipsed, holes in the electric tapestry. Later, the bandmates are shown walking down a wet city street; strips of color slip between them and stain the sidewalk. When they arrive at a nightclub and begin to dance under the pink gels, the intoxication of the evening sweeps over them and animates them, and bleeds from the illuminated rames.

Once again, we’re proud to be working together with Yvette Ray, Kevin Beesley, and Randy Iwata at Mint Records to bring you some of finest music Canada has to offer. In case you missed it the first time around, we’ve got copies of Grab That Gunon hand for all of you on-air giveaway needs. If you need more info call Andy Gesner at 732-613-1779, or emailinfo@HIPVideoPromo.com . You can also visit www.MintRecs.com or www.theorgan.ca to find out more about The Organ.