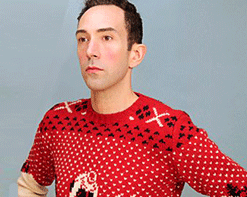 Inspiration can come from some of the most peculiar places. The key is not necessarily being able to convert that inspiration into art, but rather being able to identify those moments when they happen. For Mike Vecchio, and his performance alter-ego Passerby, that moment came on the city streets that could have been like any other. Or rather, it happened underneath the city streets. A wheelchair-bound artist named Joseph was selling his original artwork and Vecchio quickly became a fan and began to amass his own collection.

The song for “www,jig” began as a basic drum beat and synth bass and it was when he added the oboe and mellotron that things really clicked. In his own words Vecchio says that the song instantly took on the musical theme of “an old UFO sci-fi movie from the 50’s” and it was at that moment that he connected that sound with the childlike innocence of Joseph’s drawings about UFO’s and alien themes. With hints of everything from Deefhoof to Magentic Fields to of Montreal, the song itself is the perfect blend of quirk and pop that it creates the perfect soundtrack to what a pop/alien invasion might sound like.

When it came time to make the actual video, that’s where inspiration met a brick wall, as he struggled through a seemingly endless stream of dead ends and fizzled leads with a handful of animators. Just when he was going to give up on his vision for the video, it was a viewing of the film I Need That Record that led him to Matt Newman and the pair instantly clicked. The creative process was fruitful and although the original narrative was slightly modified, it ended up having countless abstract references to the lyrics of the song.

The video itself is something you have to watch to really fully grasp the breadth of how fantastic of an undertaking and work of art it is. It’s a colorful cornucopia of stop motion animation, vintage magazine cut outs, a mashup of time and space, and yet through it all somehow all feeling futuristic. Maybe it’s difficult to comprehend but when you can combine Max Headroom and Sitting Bull in the same video and it works without question, you know they’re doing something right. Imagine a living collage of pop culture references all brought to life frame by meticulous frame. Watching the video is something that requires multiple views to really comprehend every level and reference. The words are hard to come by to truly describe this wild ride, so do yourselves a real favor and see for yourself!

We’re so psyched to be working with Mike Vecchio and the Passerby project and we are happy to do anything we can do get this video into your programming! Please contact Andy Gesner and the HIP Video Promo staff at (732)-613-1779 or email us at info@HIPVideoPromo.com. You can also visit www.PasserbyPop.com or www.Twitter.com/PasserbyPop for more info.