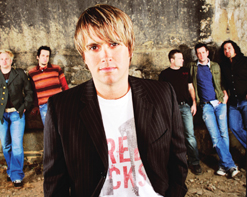 Hello to all of my rock and roll kindred spirits! It’s Andy Gesner and the staff from HIP Video Promo, and while it may not feel like it yet, the weather is changing. College dormitories will be flinging open their doors and windows soon, and there’ll be rock shows on the quad; later, there’ll be summer festivals and all-night house parties and never-ending gigs and unforgettable nights in nameless clubs all across America. The Pat McGee Band is familiar with all of these scenes, and many more. For the past decade, the road has been their home – they’ve toured non-stop, building the sort of dedicated fanbase that sometimes accrues to traveling musicians who are willing to take chances, cut loose, and put it all out on the line for audiences. The Pat McGee Band (or PMB, as those in the know call them) has drawn comparisons to classic live acts like Blues Traveler, Widespread Panic, and moe, and they’re all deserved – but when the group takes off, they arrive somewhere wholly their own.

Many have called the PMB a jam band, and by that they mean that the musicians have an uncanny ability to anticipate each others’ moves and respond dramatically in real time without losing the groove. The instrumental departures at PMB performances are breathtaking for sure – but the heart of the group has always been Pat McGee’s forceful, emotionally direct songwriting. McGee is a craftsman with a huge heart, and a tunesmith with an ear for a flexible and expressive melody. The dazzling virtuosity of the guitarists and percussionists keeps the kids in the crowd dancing and screaming, but it’s the PMB’s warm, inviting songs that compelled hundreds of thousands of fans to purchase copies of the band’s independently-released albums..

PMB put out three records before releasing one through a major label. But no studio album could ever fully capture the camaraderie and musical conversation that the Richmond, Virginia combo generates in concert. Thus, our friends at Kirtland Records have decided to package two PMB shows on a single DVD set, and combine it with a live CD version of a performance in Birmingham, Alabama. Vintage Stages Live is a perfect introduction to the group: all their best-known songs are here (including national singles “Runaway” and “Rebecca”), and the instrumentalists cut loose and solo energetically, but never interrupt the flow of the concert.

The clip for “Annabel” – a song originally released on Save Me, the PMB’s major label set – is an excerpt from the DVD. Everything we’ve come to expect from the Pat McGee Band is here: frenetic acoustic strumming, interlocking riffs, percussion and piano, and a towering solo at the climax of the song. The footage directed by Jeremy Schulz and Peter Harding is generous and open-handed: shooting the band from above, they lavish attention on all the members of the band, offering viewers an on-stage window onto the musical discourse. Pat McGee himself is identifiable and sympathetic; a regular guy with a most uncommon talent, and a folk-poet at ease in the white-hot spotlight.

Much gratitude to Kirtland Records’ Tami Thomsen and their fabulous team for bringing us on board to share this engaging live Pat McGee Band clip with you! We are fully stocked with copies of their CD/DVD set Vintage Stages Live, and we’d love to set you up with copies to use for contests or on-air giveaways. If you need more info, call Andy Gesner at 732-613-1779 or e-mail us at info@HIPVideoPromo.com. You can also visit www.PatMcGeeBand.com, or www.KirtlandRecords.com to find out more about Pat McGee Band.