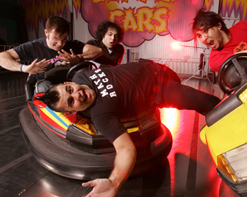 Rock and roll salutations to all of my adored music video programming friends! It’s Andy Gesner and the staff from HIP Video Promo coming at you with another video that makes the NYC area scene proud!. “We mosh because we care”, boasts Patent Pending’s much-visited MySpace page – and the minute you slip Save Each Other, The Whales Are Doing Fine, you’ll know they mean it. Their music radiates enthusiasm and camaraderie, and the live and immediate sound of the album is a pretty damned good simulation of the hysteria this group can generate in concert. Patent Pending crisscrossed the nation relentlessly before they got their record deal, playing explosive pop-punk in basements, garages, coffee-shops, and small clubs and gathering with a wildly-supportive young fanbase in the process. Now they’re rocking showcases and theatres, including a run on the entire ‘06 Warped Tour and just getting off a tour with Gym Class Heroes, as well as sharing stages with bands like Authority Zero and Tokyo Rose. But even though the venues and the reputation have gotten bigger (their official mascot, Benny The Whale, recently won an episode of Fuse’s “Pants Off Dance Off”!!), the show has barely changed at all: Patent Pending still brings it raw, explosive, tuneful, and fun.

For many musicians, success strains the connection with audiences. No such worries about Patent Pending: the relationship between the “P-Unit” (as they humorously call themselves) and their listeners continues to deepen. The quartet performs with such abrasive intimacy and raffish charm that listeners inevitably develop possessive feelings about Patent Pending. If you don’t believe us, just check the stats – the group won a nationwide fan-driven contest on PureVolume, and earned the right to perform at this summer’s Bamboozle festival. Save Each Other, The Whales Are Doing Fine held the #1 sales rank on Interpunk for three weeks based on pre-orders alone. And the P-Unit has built itself a formidable army of enthusiasts on MySpace, and perhaps more importantly, they’ve fully embraced the idea of social networking. “We don’t have fans, we have friends”, boasts singer Michael Ragosta.

Save Each Other, The Whales Are Doing Fine, their full-length debut, is a winning collection of uproarious, exuberant, and frequently-hilarious pop-punk songs. Even when they’re advising a scenester to lift his own spirits – as they do on “Cheer Up Emo Kid” – it’s always done with a warmth and good humor that’s rare in any genre. Elsewhere, the group stretches out, incorporating elements of noise-rock, classic thrash, and even doo wop into their mixes. “This Can’t Happen Again”, however, is straightforward pop-punk of the best kind: shouted vocals, scruffy guitars, a breakneck tempo, and a chorus so infectious that it’ll keep playing in your head long after you take your iPod off.

No, Patent Pending isn’t afraid to smile: on their website and in publicity stills, they’re grinning back at their audience with a look like they can’t believe how much fun they’re having. It’s not the tough-guy stance we’ve come to expect from many modern punks, and it’s tremendously refreshing. In the clip for “This Can’t Happen Again”, the P-Unit throws caution aside and throws a low-budget blast for the video camera. Augmented by rudimentary props (all carried on and off of the frame by bandmembers), Ragosta tells his story, stopping periodically to jam with the group. He’s in bed, he’s with a girl, he’s in jail, he’s chased by a band mascot in a whale suit. (Benny the Whale, incidentally, is credited as the director of the clip.) The band also breaks for one of the most hilarious choreographed sequences we’ve seen in a long time. In keeping with their “for the fans” aesthetic, Patent Pending has added a “making of the video” YouTube segment to their MySpace page. It’s funny as hell, but make sure you watch the real video first!

All of us here at HIP see many big things happening for Jon Landman and the team at We Put Out Records for the rest of ’06 and heading into ’07 and we’re proud to be a part of this winning team! Patent Pending will be on the road all winter, so if you’d like to set up video interviews or IDs, don’t hesitate to be in touch. We’ve also got plenty of copies of Save Each Other, The Whales Are Doing Fine on hand for all of your on-air giveaway needs. If you need more info, call Andy Gesner at 732-613-1779 or e-mail us at info@HIPVideoPromo.com. You can also visit www.WePutOutRecords.com or www.PatentPendingSmells.com to find out more about Patent Pending.