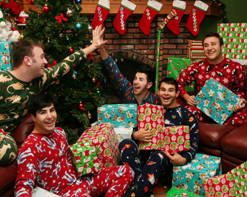 Hello friends! It’s Andy Gesner and the soon-to-be festive staff of HIP Video Promo here to kick off your holiday season right! As much as we hate to admit it, the year’s almost over. But there’s a silver lining to the passage of time: the holidays are coming. Here at HIP, we know that punks and independent rockers can spread the seasonal spirit as well as anybody – they just might take slightly offbeat routes to the same destination. For instance, consider Patent Pending. The fiery, hyperactive punk-pop combo sound pretty excited for Christmas to come. But nobody expects the band whose last album was titled Save Each Other, The Whales Are Doing Fine to sing us any straightforward, blissful hallelujah. And they most certainly have not, but they may have inadvertently stumbled upon a classic concept anyway. To the long line of hilarious holiday songs that includes The Waitresses’ “Christmas Wrapping”, The Kinks’s “Father Christmas Give Us Some Money”, and the immortal “Grandma Got Run Over By A Reindeer”, we’re proud to add Patent Pending’s “She’s A Ho Ho Ho Merry Christmas”.

The cheeky Long Island rockers know they stand on the soldiers of comedy giants: they send a shout out to “Grandma” in the first verse. And they’re traditionalists enough to decorate the song’s first chorus with bells and chimes, and sing together like a caroling choir. But make no mistake – the rest of the track is the raucous punk-pop that has made Patent Pending a big favorite for rock lovers nationwide. Save Each Other, The Whales Are Doing Fine was one of the most lighthearted and engaging punk records released in 2006, and it established the band as one that could rock you to the core and make you laugh at the same time. Everything about Patent Pending is friendly, approachable, and funny as hell – this is a band that recorded a song to play back during the construction of their website titled “Website Under Construction”. They don’t take themselves too seriously, and they encourage the sometimes poker-faced punk underground to follow suit.

The subject of “She’s A Ho Ho Ho Merry Christmas” is, as you might guess, a woman who uses the cover of the holiday season as a pretext for sleeping around. In heavier hands, this would feel obvious or simply irreverent; but Patent Pending are masters of silliness, and they provide the levity required to tell the story. “There’s no shopping, just bar hopping”, they report, listening to the young woman jingle all the way to the bedsheets. The video dramatizes the narrative in the usual over-the-top style we’ve come to expect from Patent Pending: we watch the heroine at a Christmas party, flirting with all the guys and a lecherous Santa, and drinking liberally from the punchbowl. Meanwhile, the band plays inside what appears to be a gigantic present – though the confetti falling from the ceiling also suggests a snow-globe. The clip concludes with the members of Patent Pending tearing the wrapping-paper off the walls of their set – the holidays are here, and the time has come to open the box and let the audience have it!

It’s once again our pleasure to be working directly with the Patent Pending crew to spread a dose of early holiday cheer! We’ve got a limited number of “She’s A Ho Ho Ho Merry Christmas” CD singles available here at HIP, so if you’d like to get your hands on some, you must act fast! If you need more info, call Andy Gesner at 732-613-1779 or e-mail us atinfo@HIPVideoPromo.com .