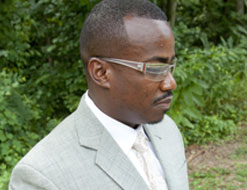 Hello to all my friends in the music video programming community! It’s Andy Gesner and the staff from HIP Video Promo, here with an intriguing new clip from an emerging artist who’s already well-known by successful musicians working in numerous musical aesthetics. If Patrick Cooper didn’t do anything other than play his keyboards, he’d still be considered one of the best contemporary world jazz artists in America. Cooper has the sort of talent that demands recognition – and consequently, it’s no surprise that the in-demand keyboardist has been sought out by some gigantic names in the entertainment industry. At the Bermuda Jazz Festival, this talented keyboardist was the musical director for the Smooth Jazz All-Stars including stars such as Nick Colionne and Regina Belle. He also wrote the title song on Marcus Johnson’s Just Doing What I Do, the tune Make it Happenon Marcus Johnson’s The Phoenix and the song Let It Happen on Jaared’s Hangtime, which was originally conceived as an intro theme to the nationally syndicated, D.C. based talk show 8101.

Like so many artists destined for considerable notoriety, Patrick’s taste for jazz started early. While growing up in Portland, Oregon he was exposed to the sounds of George Duke, The Crusaders and a myriad of other great jazz artists. He grew up in the church and was fascinated by the harmonies, voicing and colors created by the organist and the pianist.“It was amazing to me how they were able to blend sounds and to work magic with the keys, “Cooper said. “I knew then that music would be a big part of my life.” He purchased books to teach himself to read music and jazz theory. By age 18, this jazz aficionado was the church’s main organist and keyboardist. By age 21, Patrick co-founded a contemporary jazz band called N-Touch. The band afforded Patrick the opportunity to hone and showcase his songwriting skills. The band performed at various jazz clubs and festivals. The band quickly achieved tremendous notoriety and fame in the Portland area. In 2000, Cooper relocated to Washington, DC where he has truly continued to flourish on the world jazz scene.

In his debut video, “I’m That Man”, superbly directed by Max Lopatin, the viewer is treated to a tale of love and trust that takes us on a journey through the trials and tribulations that come with those feelings. For this clip, Patrick enlisted his childhood buddy and accomplished vocalist Nehemiah Booker. Nehemiah’s vocals are smooth and sincere, flawlessly getting the point across that he is the man for his dream girl. With the head nodding verses and the catchy chorus, this song is inevitably going to get embedded in the deepest corners of your brain. The video’s story is sincere, heartwarming and relatable to anyone that has ever been in love and has chased that feeling against all odds. Between sweeping shots of incredible piano playing, a solid and eye catching storyline and fast paced motorcycle shots, this video has it all. We won’t give away the ending, but the good guys always win, and you’d be crazy not to check out how it all happens.

It is our sincere pleasure to have the opportunity to work with Patrick Cooper to bring you this spectacular new video. We see big things coming for Patrick and we encourage each and every one of you to support this video. If there is anything at all we can do, call Andy Gesner at 732-613-1779 or e-mail us at info@HIPVideoPromo.com.