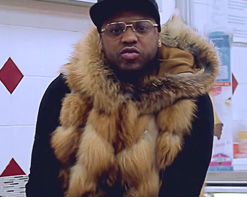 There are plenty of artists coming up out of Brooklyn right now, but while everybody’s reporting, Peter Currency has a different newscast and is truly doing his own thing. Save for a few years when he was younger which he spent living in Haiti with his family, he has lived in Brooklyn his entire life. When he was younger, Peter Currency began writing poems, and over the years, an interest in poetry blossomed into an interest in music. While he doesn’t cite any artists as “influences”, Peter Currency’s favorite musicians include Jay Z, Cam’ron, Gucci Mane, 2Pac, Ma$e, AZ, and N.O.R.E.

Last year, Peter Currency released his debut music video for “Riches and Wealth”, and hip-hop blogs all over picked it up. #WKND calls him “a hustler’s hustler who knows what it takes to make it happen”, and 2DopeBoyz said, “while it may blatantly seem like it’s entirely about the monetary gains, Peter is also locked in on raising the fortunes of his mind and the responsibilities that come with the territory.” His latest single, “Jugg X Juggle”, has even gotten the attention of radio stations, gaining airplay on stations like New York’s Power 105.1.

“Jugg X Juggle” will be included in an as-of-yet untitled project that Peter Currency will be releasing soon. He says the new record “is all about hustling and getting what you want”, and that “Jugg X Juggle” is about “making the best of it”, and how he’s “juggling now by investing into myself… enough to get by but still maintain my lifestyle and still live.” Peter Currency sat down with director Ced Lynch to come up with the treatment for the music video- which was filmed in Flatbush, Brooklyn- with the aim of bringing the best character out of the record. The “Jugg X Juggle” video shows plenty of vices, and centers around a night in a strip club, with close-up shots of bottles under the neon lights.

It’s always a blast working with an artist that’s truly on the rise and moving upward; we’re certainly thrilled to be on Peter Currency’s promotional team! Please let us know what we can do to get the “Jugg X Juggle” music video into your programming! more information please contact Andy Gesner and the HIP Video Promo team at (732)-613-1779 or email us at info@HIPVideoPromo.com. You can also visit www.Twitter.com/PeterCurrency for more info on Peter Currency.